Mr. Tsai Shiyuan was an employee of a construction contracting company in Taiwan. He has practiced Falun Gong for six years. Before he started practicing, Mr. Tsai had smoked for 30 years and averaged one and a half packs of cigarettes a day. As a result, he had a dry mouth and coughed constantly. No medicine could improve these problems. Although Mr. Tsai knew cigarettes were the culprit, he was unable to quit smoking. 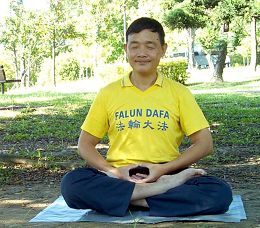 Mr. Tsai said, "My lungs showed up black on the X-rays. Doctors told me that it was cigarettes that caused it. I made up my mind to quit smoking over 100 times, but each time I soon surrendered to my addiction. I could stay away from cigarettes for at most seven days. It seemed that each time I tried to quit smoking, my addiction became stronger. Eventually I gave up on myself."

He stayed up late one night assembling furniture. The next day he woke up with unbearable lower back pain that never comletely went away. It would return a month or two after he got a treatment. On bad days, Mr. Tsai's back would hurt when it was about to rain. He once commented, "My lower back pain is even more accurate than the weather forecast." But now he says, "This unbearable torment disappeared shortly after I started practicing Falun Gong. I feel so lucky. It was like a miracle."

August 2002 was the turning point in Mr. Tsai Shiyuan's life. Because his company had taken a construction contract in Tainan, a city in southern Taiwan, he was sent to Tainan City. One day he saw a flyer with an introduction to Falun Gong in the company dormitory. He went to the website on the flyer and found a Falun Gong group practice site nearby. Then he joined a nine-day class to learn Falun Gong, which started on August 1, and he became a practitioner.

Mr. Tsai said he will never forget how he quit smoking. "It happened shortly after the nine-day Falun Gong classes. On August 15, a colleague offered me a cigarette. I was stunned. I thought, 'Why do I need a cigarette?' Then I remembered that I had not smoked for ten days, that had completely forgotten to smoke. It was as though I had never smoked at all." His addiction to cigarettes completely disappeared.

After this amazing experience, Mr. Tsai developed an attachment to having his back pain treated. Every once in a while, He would check to see if his lower back pain had disappeared like his former addiction to cigarettes. He said, "When I didn't think about it, I didn't have back pain. Every time I thought about back pain, it would return shortly. I often wondered, 'Perhaps I haven't practiced the Falun Gong exercises frequently enough.'" As he continued to study the Fa, he realized that the purpose of cultivating in Falun Gong is to return to one's true self and that the key to enhancing one's cultivation level is to enhance one's xinxing. Once he let go of his attachment to having his lower back pain healed, Mr. Tsai became illness-free. He let go of the attachment gradually. About a year after practicing Falun Gong, he suddenly realized that he had not experienced lower back pain for a long time and that it had disappeared altogether.

Falun Gong is such a wonderful high-level cultivation practice. Since its introduction to the public in May 1992 by Master Li Hongzhi, Falun Gong has become very popular and has been spread to over 80 countries around the world. Falun Gong has helped over 100 million people worldwide become healthy and moral and has thus made the world a better place. However, Falun Gong has been severely persecuted in China because of Jiang Zemin and the Chinese Communist Party's (CCP) intense jealousy over its popularity. The CCP has squandered huge amount of its resources and used its police, judicial, and medical systems to suppress Falun Gong. The CCP has run smear campaigns and hate propaganda against Falun Gong in China and the rest of the world to deceive the public so as to justify its suppression of Falun Gong. Out of compassion for the people deceived by the CCP's hate propaganda, practitioners have been clarifying the truth to people, around the world, particularly to people in China. Mr. Tsai has been clarifying the truth over the Internet and by phone in his spare time.

"At first, I didn't know how to respond on the phone. Sometimes I was worried and sometimes I was afraid. I could get emotional because of negative responses from the other end of the line. Through my daily Fa study, I continued to upgrade my understanding on this mission from the standpoint of the Fa. Nowadays when I call China, I think of nothing but explaining the truth about Falun Gong and wholeheartedly saving people in China. Consequently, my calls to China have been going well in general. The percentage of people not receptive to what I have to say is getting smaller." Now that he has built up years of experiences calling China, he has learned to refer to current affairs and use informational materials prepared for different regions in China to clarify the facts to people in different regions. Oftentimes people will develop an instant interest in the phone conversation, long to listen to what Mr. Tsai has to say, and even agree to quit the CCP and/or its two student leagues. He said, "I have learned that clarifying the truth via phone is a very important and direct approach. I feel as though I were talking to them face-to-face. I can tell what goes on in their minds."

Saving People with a Kind Heart and Discriminating against No One

As today's people have become morally degenerate, identity theft and financial fraud are rampant. The rapid increase in the number of victims makes people's blood boil. When people in Taiwan realize they are speaking on the phone to someone trying to defraud them or steal their identity, they either curse them or hang up the phone right away. As a Falun Gong practitioner, Mr. Tsai responded in a quite surprising way, because he thinks only of saving people. A few months ago, he received a phone call from a woman. She said, "Hello, I am calling from Taichong City District Attorney's Office. Are you Mr. Tsai Shiyuan? Is your ID 1234567? Is your home address such and such?" The woman had all of his correct personal information, but Mr. Tsai instantly knew it was someone trying to defraud him. He interrupted her and said, "You must be calling from China. [Mainland Chinese people have a different accent from those in Taiwan.] My personal affairs are not important compared to the severe problems happening in your hometown. These issues affect your family and your safety and future. You have to know about them." The woman sounded very interested and asked, "What problems?" He talked about the earthquake in Sichuan Province, the June 4th Student Massacre in Tiananmen Square in 1989, the Epoch Times' Nine Commentaries on the Communist Party, the CCP's history of slaughter and massacres, and the CCP's persistent lies and propaganda. In the end, he obtained her consent to publish a statement for her on the Epoch Times' website to quit the CCP and/or its two student leagues.

Less than five minutes after their conversation ended, the phone rang again. "Hello, Mr. Tsai. I am calling from Taichong City District Attorney's Office. Is your name Tsai Shiyuan? Is your ID 1234567?" Mr. Tsai asked, "Huh, didn't you just call me? I have already published the announcement to quit the CCP for you with a pseudonym." "Oh, I am her colleague. I would like to ask if I, too, can quit the CCP with a pseudonym." Mr. Tsai thought, "Great. Now she is asking to know the truth. I must not let this opportunity pass me by." He clarified the truth again. Then she asked to quit the CCP and its two affiliated organizations even before he suggested it. He realized that those who know the truth about the CCP are the best live media.

“Once a Drinker and a Gambler, Now a Good and Considerate Husband (Photos)”

“Solidly Cultivate This Life Given by Falun Dafa”