After Hesitating for Twelve Years, a Falun Gong Supporter Becomes a Practitioner

(Clearwisdom.net) Mr. Zhang has witnessed the miracles of Falun Gong (or Falun Dafa) since his wife began practicing in 1996. He has firmly believed in Dafa and has fully supported his wife and daughter in their practice. He has also helped practitioners with Fa-rectification activities and has not given in when he himself was faced with persecution. 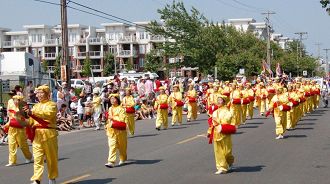 Mr. Zhang in the front line with the Drum Team in the parade

In the past, his wife asked him to practice, but he always said, "It's not time yet."

This February, Mr. Zhang decided to become a practitioner. He said that when he spoke to his daughter about this over the phone, she was so happy that she cried.

After practicing for five months, Mr. Zhang stated, "I started too late! Not until I began to practice did I know the huge difference between a supporter and a practitioner."

The beauty of Dafa truly impressed him

Mr. Zhang reported that his wife developed serious pulmonary emphysema in 1996. She gasped so much that she could not lie down and needed frequent hospitalizations. In the end, the hospital informed her that they were at their wit's end and that she should try qigong. She discovered Falun Gong shortly thereafter.

When Mr. Zhang's wife began to practice Falun Gong in early 1996, she experienced tremendous physical changes. In late July, the students from her class at the school where she taught invited her to come to an alumni gathering that they were hosting. Neither her husband nor her daughter felt comfortable letting her go by herself, so they accompanied her. Unexpectedly, she didn't need anyone to take care of her. In fact, she traveled frequently throughout the day and did quite well.

His daughter, whose health was not very good, later joined her in practicing Falun Gong. She improved tremendously. Many miraculous things have happened to her. Mr. Zhang said that he knew then that Falun Gong was truly great and was not a typical form of qigong.

Since he knew that Dafa was great, why didn't he want to start practicing earlier?

Mr. Zhang said that it all came down to his lack of understanding about Dafa: he felt that his physical condition was comparatively good, so he did not have the need to practice. However, there were two main reasons contributing to his unwillingness to practice at the beginning: First, he was afraid that he couldn't endure the hardship involved.

"My wife and other practitioners were always very busy, and they endured a lot of hardship. My wife got up at 4 a.m. every morning, then went out to do the exercises. In winter, when temperatures dropped to minus 10, or even minus 20, they still stuck to doing the exercises outside. Also, I saw that it was painful for my wife to sit in the lotus position. Even after she had been practicing for six months, she still woke up in the middle of the night aching (actually, not everyone has to endure the same pain). During the past few years, she was even busier, handing out materials about Falun Gong, promoting the Divine Performing Arts performances, and other things as well, so that she was busy all day, everyday.

"I admired practitioners: They were able to endure hardship and suffer for their beliefs. Despite practitioners suffering brutal persecution under the Chinese Communist Party (CCP)--my wife has been detained for going to Beijing to appeal to the government--they still went out to clarify the truth of Falun Gong in order to save people. I thought that they were truly remarkable. But I was afraid that I lacked perseverance and couldn't endure the necessary hardship. Therefore, I feared practicing."

Not being able to let go of hobbies

In mainland China, Mr. Zhang worked in education. A person as quiet as he not only did well in his field, but also had many interests, such as singing, acting, writing Chinese calligraphy, and Taichi. After coming to Canada, he acted as a volunteer in the seniors association in his local community.

Mr. Zhang said that hobbies were important in his senior years. At the same time, they also became attachments that he couldn't relinquish. Moreover, by teaching others how to do Taichi, he had developed a group of "disciples." They surrounded him all day long, and he thought that they would be lost without him if he stopped teaching.

"As a result, for a long time, my wife and I were both very busy. She was tied up with Dafa affairs, whereas I indulged myself in my own hobbies." Mr. Zhang said.

Teacher provided him with the opportunity to obtain Dafa

Mr. Zhang thought that because benevolent Teacher Li may not have wanted to leave him alone at the final stage of the Fa-rectification, he gave him the opportunity to obtain the Fa.

Mr. Zhang recalled this time, "They needed one more person to fill in for the position of a cymbal player, who would also act as a conductor. However, I was not a practitioner at that time.. How could a non-practitioner conduct a group of Falun Gong practitioners?

"So, I made up my mind: I wanted to become a practitioner first, then take on the role of being the conductor of the drum team. At that time, the location for group Fa-study had changed to our home, so I began to enter the door of Dafa cultivation."

Feelings are tremendously different inside the door of Dafa cultivation

Mr. Zhang said: "Before I became a practitioner, I had read Zhuan Falun and various articles published by Teacher Li. At that time, I figured that, because I supported Dafa, whatever Teacher Li said, I needed to know and be informed about.

"At that time, whenever I opened my mouth, I began with 'your Falun Gong' and 'I helped you with such and such,' etc. When I decided to practice, the situation changed: I no longer considered myself a bystander anymore, but rather a particle.

"Before I read the book or Teacher Li's scriptures, I considered my new position: now it was me studying the Fa, so I needed to measure myself against the Fa and know that when I do things for Dafa, it is not that I help Falun Gong with something, but rather that I am a practitioner who validates the Fa. My feelings were completely different."

Five months after practicing, with continuous Fa-study, Mr. Zhang said that his greatest regret was entering Falun Gong so late. He understood clearly how great Dafa was, and yet he still ended up dawdling outside the door for so many years. He wished he could have begun to practice earlier.

Now Mr. Zhang is very busy: everyday he gets up at 5:30 a.m. and then goes with his wife to the exercise site to do the exercises. After two hours, they go deliver papers for the Epoch Times. It takes them three hours to finish the task. Two days a week, he and his wife go to the Service Center for Dafa activities, including training practitioners to help people with the "Three Withdrawals" (withdrawing from the Chinese Communist Party and its two youth organizations). Every night the couple study the Fa together. Everyday they are very occupied. Mr. Zhang's old notions have completely disappeared while cultivating.

You can always see Mr. Zhang in the Falun Gong section of a parade. He is the one conducting a group of senior practitioners on the drum team. They are highly spirited, and they line up sharply. They receive warm applause wherever they go.

Mr. Zhang said, "I will surely increase my diligence in cultivation, be a true practitioner and eventually go home with Teacher Li."