According to a Central News Agency report on August 7, Falun Gong practitioners from Hong Kong held a parade protesting the persecution and the fact that the Chinese Communist Party (CCP) broke their promise of improving the human rights situation in China, and instead used the Olympics as an excuse to intensify the persecution of Falun Gong. 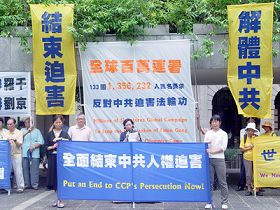 Later, practitioners marched from Chater Garden to the government building. They submitted an open letter, protesting the worsened persecution.

“Mr. Fan Youjun Dies as Result of the Persecution in Hubei Province”