On August 2, Falun Gong practitioners from Boston and volunteers from the Service Center for Quitting the Party in Boston held an activity in Chinatown, Boston to expose the nine-year-long persecution of Falun Gong in China and support the 40 million Chinese withdrawals from the Chinese Communist Party (CCP). 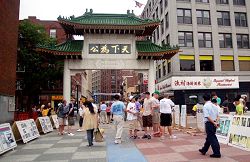 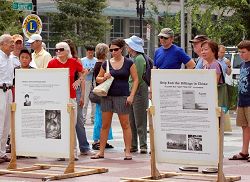 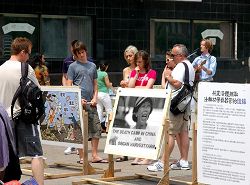 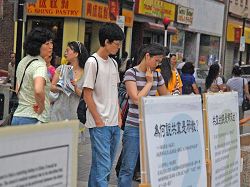 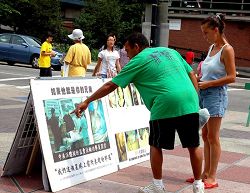 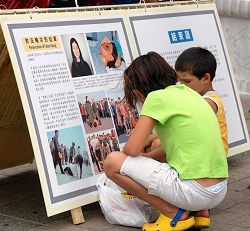 In Chinatown, practitioners set up 40 display boards in English and Chinese to expose the evil nature of the CCP. They demonstrated the exercises, performed songs about the persecution and gave speeches. Many people were drawn to the activity. Some of them asked for the contact information and details about Falun Gong.

Several Chinese people expressed that they were glad to see so many Falun Gong practitioners holding an activity to help stop the persecution. One Chinese gentleman told practitioners that he has read the Nine Commentaries on the Communist Party several times. A young businessman from China was shocked by the details of the persecution. He had heard about the persecution but never realized how brutal it was. He took many photos of the display boards.

An elderly Chinese gentleman, whose family had been persecuted by the CCP during the Cultural Revolution, said that the Chinese people will continue to suffer from the CCP's brutality if nobody exposes their crimes. He praised practitioners, saying, "You are great. You are doing the right thing. Keep it up."