Sydney: "Falun Gong is Welcome in Our Community" (Photo)

(Clearwisdom.net) On August 23, Falun Gong practitioners in Sydney were invited to take part in a local, annual multi-cultural parade. This was the fifth time that practitioners attended the event. 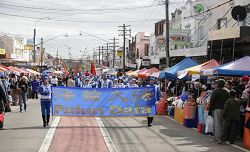 Over the last five years, the Falun Gong group has won awards from the local government at every parade. The local council has even passed a resolution stating that Falun Gong is welcome in the community.

This year, the Divine Land Marching Band, consisting entirely of Falun Gong practitioners, performed in the parade and played "Falun Dafa Is Good" and "The Fa Rectifies the Cosmos". They were warmly received by the local people.

“Japan: Practitioners Parade in the Rain, Spectators Praise Their Steadfast Efforts to Stop the Persecution (Photos)”