(Clearwisdom.net) On August 18, 2008, practitioners again held activities on St. Martins Square in downtown London. They set up a booth and banners to expose the atrocities of the persecution of Falun Gong in China. They condemned the escalation of the persecution under the pretext of hosting the Olympics and urged the general public to help stop the persecution. 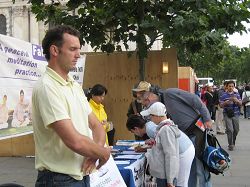 Practitioners set up on St. Martins Square in London 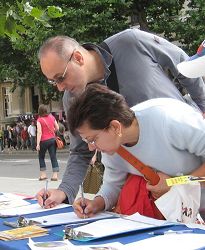 An Italian couple signs petition against the persecution of Falun Gong

Display boards attracted a lot of people's attention. Many people stopped to read about Falun Gong and the persecution in China. As soon as practitioners set up the booth, some people came over to ask for more information. Throughout the six hours, people came one after another and signed the petition against the persecution. Practitioners made good use of the opportunity to talk to people face to face. They were pleased to find that more and more people have come to know the facts about Falun Gong and the persecution, and that many have told their friends and family about the situation.

One woman said that she was indignant about China's recent arrest of a British TV reporter while he was filming a peaceful protest. She said, "We don't like communists at all. They are cruel and are not considerate of others. They cannot reasonably deal with things and are liable to resort to violent crackdowns." "To construct a beautiful Olympic Village, many residents were forced out of their homes, which were then demolished to make way for Olympic venues." "I support your endeavor."

A youngster signed the petition along with his father. He said, "I don't understand why all these things have happened. It is inconceivable that such innocent and peaceful people are persecuted. I think that whatever you have done will work and I really hope so." He also mentioned that he would definitely let more people know what he saw that day. In addition, he said that he was going to study mass media at university this coming September and that he might start with reporting something like the persecution of Falun Gong.

Though the three members of an Italian family didn't stop after accepting flyers, their attention was drawn by the display boards. Right after viewing the boards, the family returned to sign the petition. When a practitioner expressed appreciation to them, the practitioner found that they didn't speak English, but the lady still tried her best to say, "China needs change."

Another Italian tourist heard of Falun Gong for the first time when she was at St. Martins Square that day. After lingering at the Falun Gong booth for a while, she signed the petition against the persecution. She said that she was shocked to see the sharp contrast between the peaceful Falun Gong practitioners sitting in meditation next to the banners and the photos of persecution. A practitioner told her that such unacceptable and cruel persecution has been going on for over nine years.

Two French girls stood in front of the display boards for quite a while. One of them told a practitioner approaching her that it was the very first time for her to hear about Falun Gong. She said, "It is important for you to do such things." Before leaving, she told the practitioner, "After returning to France, I'll try my best to let more people know about Falun Gong." The display boards also attracted a lot of Chinese people's attention. A couple from Thailand living in London watched the demonstration of Falun Gong exercises for a long while. The lady asked where they could learn the exercises, while her husband was anxious to get Falun Gong books. When they were told that the Falun Gong exercises are taught for free at the Regent's Park on weekends and that the books are available on the Internet, they seemed to be very happy. She and her Chinese husband signed the petition against the persecution.

Among several students at the booth, there was a Chinese boy. It turned out that he is the child of an official working at the Chinese Embassy in France. Standing in front of the exhibition booth, the boy asked a practitioner, "You are doing something against China here, aren't you?" The practitioner then patiently clarified the truth to him. He said to the boy that what Falun Gong practitioners have done was simply telling people what Falun Gong is, exposing the Chinese Communist regime's cruel persecution against Falun Gong and calling for an end to the atrocities. He added that actually the CCP is the culprit that has killed over 80 million Chinese people. The practitioner further told him that he should know right from wrong and choose justice, and that if he really wanted to do something good for China, he should support the persecuted people, oppose the persecution of Chinese people and help stop the Chinese regime from committing crimes against Chinese people. After a while, the boy seemed to understand.

“Eliminating the Attachment to Sleep and Becoming More Diligent”