(Clearwisdom.net) Dr. Rudolf Garcia Gallont from Guatemala is a member of The Transplant Society (TTS). He recently attended a TTS conference in Sydney, Australia. He told this reporter that for the last two years, TTS has paid close attention to the allegations of organ harvesting from living Falun Gong practitioners in China. 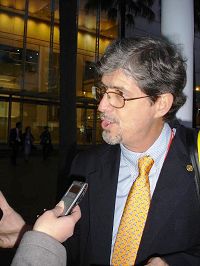 Dr. Garcia said, "Since this problem with Falun Gong was brought up in Boston two years ago, The Transplant Society has become very active, especially through President Nicholas Tilney, and Dr. Francis Delmonico who is in charge of International Affairs for TTS. He is also the representative of TTS at the World Health Organisation (WHO). Since Boston, when the society started to take all these actions, I don't think there is any doubt that every doctor who is here knows that this is happening, and has a very clear opinion about it. No question. No question."

"Among the different actions that TTS took to address this problem, Dr. Tilney, and Dr. Delmonico made several visits to China. They sat down with the heath authorities in China. The Ministry of Heath in China promised they would change this policy of using organ from executed prisoners."

Dr. Garcia said, "Besides that, TTS organised a huge meeting in Istanbul a couple of months ago. The whole science community and WHO generated what we called the Istanbul Declaration, which addresses all the problems, not only from the executed prisoners, but anything related to organ sale, transplant tourism, and to organ trafficking. So the whole problem has been addressed. And WHO has taken this as an official opinion of the transplant community of the world. 152 countries were represented at this meeting, and the declaration is already official."

He continued, "Tomorrow there is a complete session here. The early morning session is about the Istanbul Declaration. So the whole transplant community knows and learns what the position of TTS is, addressing your problem, and the problem of many other countries"

"There are a couple of countries in the world who are special buyers of these organs. So I think TTS as a scientific society has taken a very clear stand in addressing the problem."

"It has already been brought to the world. This is the official statement, which urges every member, and every country to follow these rules to stop all these kind of practices."

Dr. Garcia said, "Well, it is officially known that this problem exists in China, especially this situation of executed prisoners. I think it is almost unique to China. I don't think, but I don't know, if this is a practice in other parts of the world. But it is condemnable of course. And society has taken a very clear stand."

When asked about if China will follow the Istanbul Declaration, Dr. Garcia expressed his concern, "This is another question, which I cannot answer, what China will do. I mean you cannot write down the things and agree to the things, but do whatever afterwards. But it is very difficult to control what happens inside a country where the system is not very open to the spread of opinions and information."

“How the Communist Regime Boosts Its Confidence with the Olympic Games”