(Clearwisdom.net) The 2008 Falun Dafa Experience Sharing Conference was held at the Sanur Paradise Hotel, in Bali, Indonesia, on August 10, 2008. Around 1,200 Falun Gong practitioners attended the conference and more than ten shared their experiences. Every speech was very touching; the audience was often moved to tears. 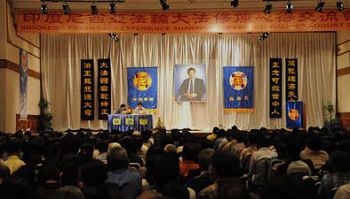 A young art dealer shared his miraculous experience of obtaining the book Zhuan Falun. He realized it was a turning point in his life and a starting point of his cultivation.

A businessman posted Falun Gong pictures all over his motorcycle. As he traveled on streets, the miracle and the benefit of Falun Gong was spread to the people.

A middle-school student shared the changes she experienced after cultivation. She became thoughtful and generous. She used righteous thoughts to solve the problems she ran into.

After the experience sharing, ten children from Minghui Schools in Djakarta, Surabay, and Sanur read aloud poems from Hong Yin in Chinese and Indonesian. Their great pronunciation and innocent faces looked very pure. One child sang a song "Ming Si" and eight children gave a dance performance together.

A parade was held the day before the conference. It started from Renon Square and went around Renon District. The procession included the Divine Land Marching Band, an exercise demonstration, the waist-drum troupe, flag alignment, floats and the fairy dance troupe. The long procession looked very attractive on the busy streets. The parade ended at the north side of famous Bajra Sandhi. About one thousand practitioners formed Chinese characters "Truth, Compassion Tolerance" on Renon Square. They lit candles quietly to mourn their fellow practitioners who died from the persecution.

A Chinese tour guide said cultivation wasn't new to the people in Sanur. The local residents were born to cultivate. Generation after generation, they live in the environment of cultivation. Several holidays were establish for cultivation. Falun Gong practitioners hope to introduce the great way of returning to one's origin, Falun Gong, to the kind and simple residents of Sanur.

“Brussels, Belgium: CIPFG Submits over One Million Signatures against the Persecution to European Union Commission (Photo)”