Paris, France: Press Conference in Front of Eutelsat Headquarters: Give NTDTV Back to the Chinese People (Photos)

(Clearwisdom.net) On the 6th of August 2008, representatives of New Tang Dynasty TV (NTDTV) and their supporters held a press conference in front of the headquarters of Eutelsat in the 15th district of Paris and called upon Eutelsat to immediately restore NTDTV's broadcast signals to China and Asia. 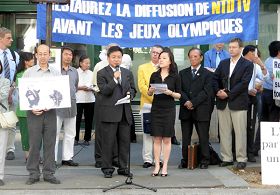 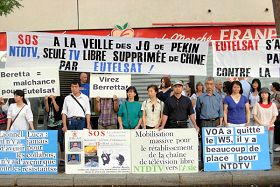 NTDTV is an independent Chinese language media dedicated to bringing unfiltered news and information to the global Chinese community and promoting traditional Chinese culture. On the 16th of June 2008, Eutelsat dropped NTDTV's broadcasting signals to China and Asia. An investigation by Reporters Without Borders confirmed that Eutelsat's so-called "technical problem" was in fact a "premeditated, politically motivated decision" by Eutelsat's CEO Berretta to obtain new deals from the Chinese Communist Party (CCP).

At the press conference, Vice President of NTDTV Wang Shaojiu said, "The Olympics are the focus of the world's attention. Everybody in the world should pay attention to the shutting down of NTDTV at this time. Our press conference today has indeed achieved such an effect. Many are paying attention. After all, this is the free world. People's voices will count. We hope all circles of the French society will pay attention to this so that Eutelsat will do what it should do: immediately restore NTDTV's signal on the W5 satellite." Wang also said, "The CCP's propaganda on the Olympics is all empty lies. In order to maintain its power, the CCP will try to silence the voice of freedom. The belief in freedom itself is an important founding principle of NTDTV. No matter what the outcome of this incident might be, our quest for freedom and justice will continue!"

An ex-minister, northern MP Fransovas Hostellerie sent a letter to support NTDTV. Her letter to the French President, which was read out, stated that there were only a few days left before the opening ceremony of the Olympics. The interruption of NTDTV's signals cannot be tolerated. Many French MPs, MEPs, defenders of human rights and press freedom are outraged by this incident. The letter called upon the President to pay attention and urge the Chinese authorities to respect media freedom, removing obstacles to NTDTV's broadcasting.

The former head of the Chinese Department at the French International Broadcasting Radio Station, Wu Baozhang gave a speech. He said it has been too long since the interruption of NTDTV's broadcasts. He called upon the entire staff of Eutelsat to make choices in front of the whole world between freedom and autocracy, truth and lies. He also urged journalists in France and Europe as well as Eutelsat's stockholders to act immediately.

The head of Asian Division of Reporters Without Borders, Vincent Brossel, said in his speech, "Eutelsat's actions should be condemned. The Eutelsat incident is yet another example of the CCP's political manipulation in the exchange of information and commerce. Eutelsat of course can not shift the blame. But large stockholders such as Caisse des DÃ©pï¿½'ts et Consignations should also reconsider Eutelsat's integrity and independence. Reporters Without Borders support NTDTV as the issue concerns media freedom."

The President of the China Democratic Party in France, Wu Jiang, said in his speech, "For more than half a century, the CCP has committed large-scale genocide and crimes against humanity, killing more than eighty million Chinese people. The hands of the CCP are drenched in blood. The CCP is a Fascist organization, a national terrorist organization, and an evil cult through-and-through. The Beijing Olympics is but a sudden spurt of energy prior to the CCP's demise. May I ask Eutelsat's CEO Berretta not to forget the collapse of the Soviet empire or the fall of the Berlin Wall."

“Thailand: Spreading the Fa at the Queen's Birthday Celebration (Photos)”