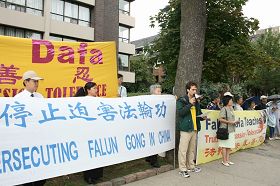 Ms. Wang Zhi, a Falun Gong practitioner, told of her experiences of being tortured in China at the press conference.

Ms. Wang was arrested twice and jailed in labor camps. The first time she was jailed in Masanjia Labor Camp in Shenyang and the second time was in Tiantanghe Labor Camp in Beijing.

She was forced to watch a video which slandered Falun Gong. She was deprived of sleep for a month and forced to do heavy labor.

Wang Zhi said: "Yu Zhou's dead body was covered by a white sheet. His family asked police for details of his death, but the policemen pushed them out and threatened them."

Wang said she talked to Yu Zhou on the Phone in December 2007. Yu was a happy person with very nice personality. Wang was very sad that such a good young man was tortured to death.