Dr. Yang Jingduan is giving a speech at the rally. 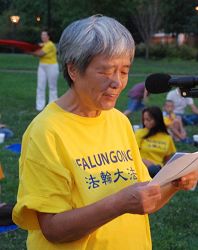 Yan Yixin, who was jailed in a detention center in Tianjin--the sister city of Philadelphia--is giving a speech.

According to the Minghui/Clearwisdom website, From December 2007 to June 30, 2008, 8037 Falun Gong practitioners were arrested in China. In July 2008, the rate of arrest increased further.

Two practitioners from Philadelphia talked about their own experiences of being tortured in China.

Chen Gang, was jailed in the Tuanhe Labor Camp for 18 months because of his belief in Falun Gong. He was rescued with help from the American government and overseas Falun Gong practitioners.

69-year-old Ms. Yan Yixin was arrested in 2000 and put in a detention center in Tianjin. She was forced to watch brainwashing videos in the detention center. Her neighbor in China, Tang Jian, who was also a Falun Gong practitioner and a high school physics teacher in Tianjin, was tortured to death on July 7, 2004. He was only 39.

Ms. Cai, a representative of the World Organization to Investigate the Persecution of Falun Gong, said that more and more people recognize the evil nature of the CCP and it is about to crash. She said the CCP is the origin of all the disasters in China, and the Chinese people will be happy only after the CCP is dissolved.

The host of the rally reviewed the violent history of the Communist Party and called upon people to recognize the damage it has brought to China. Before the end of the rally, practitioners observed five minutes of silence in memory of the over three thousand Falun Gong practitioners who have been tortured to death in China.