Ms. Li Shuzhen Dies after Being Interrogated by Police in Jilin Province (Photo)

Ms. Li Shuzhen, 58, was formerly employed by the Huaxin Wood Products Company, a division of the Tonghua County Forestry Bureau. She began practicing Falun Dafa in 1996, and soon became very healthy. After the persecution started in 1999, Party officials ransacked her home, extorted money from her, sent her to a forced labor camp, and brutally beat her multiple times. 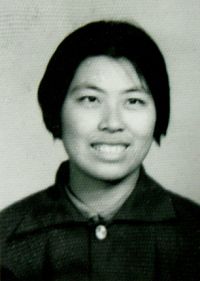 In December 2000, the police found a truth-clarifying flyer while ransacking her home. The police then procured many flyers as "evidence" and detained her in the Tonghua County Detention Center, where she went on hunger strike to protest. Deputy Director Wang Liping had a male prisoner bring dirty water that was used to wash feet mixed with some milk power. Then he spat in the mixture and force-fed it to Ms. Li. Ms. Li was tortured so severely that she began to have symptoms of heart disease, and she vomited blood for two days, which stopped the guards from further force-feeding her. When Ms. Li did the Falun Dafa exercises in the detention center, Wang Liping always cursed or beat her and had guard Jiang Minhua spray her with a hose. Ms. Li was released after four months, and the police extorted three thousand yuan from her family.

On April 8, 2001, Ms. Li went to Beijing to appeal. Officer Jin Minglie, Zheng Rong, and Ms. Li's husband went to Beijing to pick her up. Ms. Li's husband had to pay all the costs and 1,100 yuan in cash. Ms. Li was sentenced to three years of forced labor. She was imprisoned in the Third Ward of the Changchun City Women's Labor Camp. Ms. Li was deprived of sleep for a full day, and guards Jin Lihua and Huo Yan punched, kicked, and slapped her. When Ms. Li was ordered to perform slave labor beyond her capability, guard Sun Jia would beat and curse her. Warden Fu Yufen punched and kicked her, causing her to experience chest and foot pain. Deputy Warden Xi Guirong shocked her with electric batons.

On March 5, 2003, the cable TV network was tapped into in Changchun City, and afterwards the guards escalated the abuse of detained Falun Dafa practitioners. Ms. Li and 17 other practitioners co-signed a letter requesting them to stop the torture. The Camp Administration assigned three male guards to the Third Ward, who took these 18 practitioners one-by-one to an office to electro-shock them while beating them. When these three male guards got tired at night, guard Huo Yan would continue the brutality.

Ms. Li's term was extended for seven days after her three-year term ended. Her employer never paid her pension, and she had to retire without any income.

On January 30, 2007, Ms. Li went to the Labor Bureau with her husband to see if she could receive some heating benefits. She was waiting in the lobby for her husband, but he could not find her afterwards. He looked everywhere for her.

At 4 p.m. the same day, officer Zhao Cunbo from the Tonghua County Police Department took her home and said to her husband, "Your wife was lost, and we took her home. Let me introduce Deputy Director Lin Bin. You should take your Residence Permit booklet and personal ID tomorrow, and you can receive 200 yuan of heating benefits at the Sanhepu Community Office." Ms. Li's husband thanked them. After they left, he found that they had deceived him. In reality, they had taken Ms. Li to be interrogated at the police department and searched her in a restroom. Ms. Li resisted, but she was not clear exactly what they did to her. After that incident, Ms. Li suffered incontinence, and she was bed-ridden and could not take care of herself. She died on March 7, 2008. The police went to harass her family four days after she died.