(Clearwisdom.net) "The Sanctity of Life and respect for human dignity overrides any sporting event." said Ms. Jan Becker, former Olympic silver medalist in Australia, when talking about the Beijing Olympics. 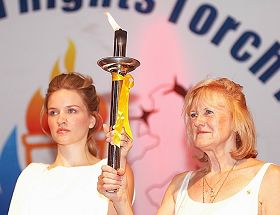 Along with the opening of the Beijing Olympics, global attention is focused on the sports event. At the same time, China's human rights, especially the Chinese Communist Party's (CCP) brutal persecution of Falun Gong has also increasingly become a focus.

Olympic athletes must know what is happening in China

Ms. Becker said, "As a former Olympic athlete, I am ashamed that the Olympics are being held in such a country. The very fact that China has not kept its promises to improve its human rights record in line with the Olympic Charter and Code of Ethics is a reason I initially thought for not having the Olympics in China. However, over the past twelve months I can really say that the process of the world waking up to the CCP has been evolving. Even when I wrote my first letter to the IOC in 2001, I was never against the Chinese people having the games, just the CCP - because of their horrific persecution of Falun Gong. Over the past twelve months, sometimes out of frustration, that the people of the world seemed complacent, and I just wanted them to understand now, not later.

"As a former athlete, I understand athletes' thinking. All they can think about is going to the Olympics. I understand they don't want anything to get in their way. They want to realize their dreams. One day I suddenly understood that it is more important for them to know what is happening in China than going to compete."

To have more people know of the CCP's brutal persecution of Falun Gong in China, Ms. Becker participated in the Human Rights Torch relay throughout Australia, especially in the 58 cities and towns in Victoria Province where she lives, as an Australian relay ambassador from November to December 2007. The torch relay caught the attention of the world's people, and shifted the focus from the Olympics itself to the CCP's persecution of human rights.

Ms. Becker is a Falun Gong practitioner. She told the reporter, "I have practiced Falun Gong for nine and a half years, since February 1999. I was just practicing my exercises in a park and had begun to read Zhuan Falun for a couple of months. I was really enjoying this newfound experience when suddenly on the 20th of July, 1999, people [in China] were being arrested and tortured. I could not understand why at this stage."

Ms. Becker continued, "As a westerner I find it totally unacceptable that more has not been done by governments to assist the ending of the persecution of Falun Gong over the past nine years. The atrocities carried out by the CCP to Falun Gong practitioners are horrendous. Through the jealousy of the then president of China, the CCP persecutes Falun Gong practitioners like me."

Ms. Becker said, "Because Falun Gong is based on the principles of Truth-Compassion-Forbearance, over the years, my nature has changed. I was always very honest, to the point of being too straightforward, and sometimes would hurt people with my blunt cold comments. I feel that as I practice further I have become more compassionate, I can temper my thoughts and be more thoughtful in how I express myself. Quite often now I notice how my thoughts can change the way things occur.

My health has improved and also my energy. When I commenced the practice I was quite ill and as I practiced things begin to change, not only with my nature but also my health, my body has become more flexible and I could actually feel the energy channels opening in my lower back. Initially I could not sit for half an hour with my legs crossed, my knees pointing to the heavens. Now I can sit in full lotus for an hour and at certain times it is the most beautiful experience. My family and friends know that Falun Dafa has done wonders for me and they can see the changes.

"For the past sixteen years I have worked as a Human Resources Manager for an Australian Company. Falun Gong has assisted me to temper myself within my job, and I try to carry out my duties adhering to my understanding as a practitioner. Even though I know I have made some positive strides, sometimes I feel I am just scratching the surface of my cultivation."

Clarifying the truth is my mission

Ms. Becker said, "Looking back, I realize I was not in a good space of enlightenment and find it incredible that it makes so much sense to me now. Even though my level may not be that high, I smile with delight and give thanks to Master Li. As a sports person I was very committed, and have always known the saying, no pain no gain, I feel this held me in good stead.

"I know now why I went to the Olympics in 1964: not for fame and self interest, but to help clarify the truth now. It is my mission."

She recalled that she held high a homemade banner and rushed to the location where other practitioners had unfurled a banner on Tiananmen Square in 2002. On the banner, there was a Falun emblem, Olympics rings and Truth-Compassion-Tolerance in Chinese.

At that moment, she felt immense compassion for the Chinese people and knew she must clarify the truth to help them have a good future.

Ms. Becker summed up her feelings: "As a former Olympic athlete, I regret that I cannot attend this sporting event since the CCP bans entry of Falun Gong practitioners. If I had a chance to join the Olympic Games Ceremony in China, I would march with pride, not as an athlete, but as a Dafa practitioner dressed in yellow and waving a huge flag - embossed with 'Falun Dafa Is Good,' for the whole world to see."

“Ms. Li Shuzhen Dies after Being Interrogated by Police in Jilin Province (Photo)”