France: Falun Gong Practitioners Gather on Human Rights Square in Paris to Call for an End to the Persecution (Photos)

(Clearwisdom.net) French Dafa disciples gathered on Human Rights Square in Paris on July 20, 2008. They exposed the 9-year brutal persecution of Falun Gong practitioners by the Chinese Communist Party (CCP) through re-enactments of the cruel tortures and displays, held a period of silence in memory of the practitioners who were persecuted to death, and appealed to the international community to help put an end to the persecution. 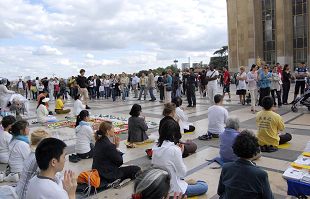 The activities held on July 20 attracted a lot of people 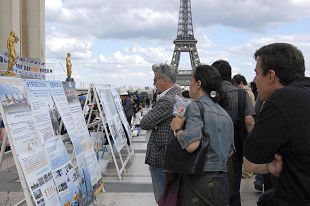 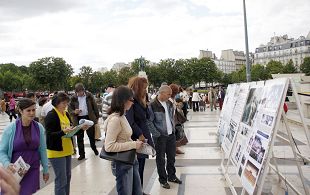 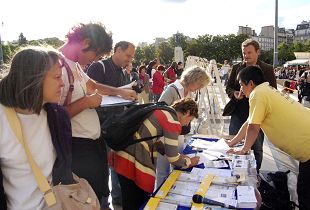 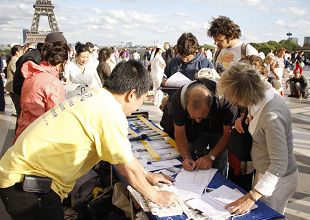 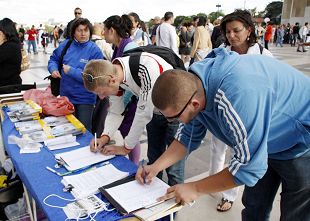 French practitioners have protested the persecution on Human Rights Square in Paris for the past 9 years, reaching many locals and tourists and visitors from around the world.

The spokesperson for the practitioners said in his speech, "Falun Gong, having endured 9 years of severe persecution, not only has not disappeared but continues to have an influence in China and has spread to more than 80 nations and regions in the world. Falun Gong practitioners do not retreat, nor do they resort to violence when faced with such brutal persecution. Falun Gong practitioners are also rebuilding the traditional Chinese values, civilization, and culture while in the midst of the persecution. Their spiritual power scares the evil CCP regime and is disintegrating the existing environment of the CCP, which is sustained by lies, violence, and fear."

The spokesperson also called for the international community to stop the persecution. "We are here to commemorate the Falun Gong practitioners who have been persecuted to death by the CCP for upholding the principles of Truthfulness-Compassion-Forbearance. Their spirit inspires us to accomplish their unfinished mission: telling the facts to the world's people until the end of the persecution and until the day that the CCP collapses. Meanwhile, we call for the international community to help stop the human rights atrocities, to support the 40 million Chinese people who have quit the CCP organizations, and to immediately put an end to the 9-year-long persecution."

Ms. Chen Zhumei, a French practitioner over 60 years old, returned to Mainland China in 2000 to clarify the truth to the Chinese government. She was detained and beaten. She was tortured with sleep deprivation, squatting for a long time, and mental abuse. She said, "The Communist Party is really evil. It is a terrorist organization. It has persecuted so many innocent people for 9 years. I hope the good people of the world will stand up against the CCP and help stop the persecution."

Ms. Chen Ying, a French practitioner, was "illegally detained" three times and spent one year in a forced labor camp when she went back to China to clarify the facts in 2000. She was nearly sent to a concentration camp where organs were harvested from living practitioners. She personally experienced how the CCP conceals its crimes and how it deceived international inspectors in seeking to host the Olympics. "The CCP deceives the international community and the media. In the name of 'economic development' and as the host of the Olympics, the crimes continue." Ms. Chen also called on Chinese people to quit the Chinese Communist Party. "The Chinese people have undergone a lot of suffering under the rein of the CCP. The root of evil is the CCP. Only by quitting it will there be hope. Just as heaven blesses China, quitting the CCP and its youth organizations as soon as possible will ensure a good future."

Ms. Feng Yajun, a Falun Gong practitioner who was illegally arrested and persecuted and escaped from China on foot, said, "My feelings are particularly complex on a day like today. The CCP takes advantage of hosting the Olympics. It has not only failed to improve human rights but has increased its human rights abuses before the Olympics. Several thousand Falun Gong practitioners have been illegally arrested and about 100 have been killed since the beginning of this year. As long as the persecution continues, I'll do my best to stop it."

In November 2001, 36 Western Falun Gong practitioners went to Tiananmen Square. They held up a banner that read "Truthfulness-Compassion-Forbearance," to tell the Chinese people about the goodness of Falun Dafa and called for an end to the persecution. French practitioners Hélène and Olivier were among them.

Hélène said, "We went to Tiananmen Square. We held a banner that read 'Truthfulness-Compassion-Forbearance.' We were arrested and beaten just for such a simple act. I myself was beaten. I hope everyone, whether in China or other countries, understands the present situation. The CCP is persecuting Falun Gong. It's very evil. It must not be allowed to continue. No one can accept it. It must be stopped."

Olivier said, "We went to China from all over the world. We, as foreigners, wanted to reveal the facts of the CCP's persecution of Falun Gong in China and call for an end to the persecution. We held a banner on Tiananmen Square to tell the Chinese people that foreigners also practice Falun Gong and that all that the CCP regime says about Falun Gong are lies. Afterwards, we were arrested and detained. So we want to tell people that, as foreigners, we will also be persecuted if we go to China."

Many people express their support

Practitioners who joined this activity came from all over France and from Belgium and Switzerland. Their exercise demonstration attracted many spectators. Many were compelled to ask why such a peaceful practice is banned in China. The materials distributed by practitioners and the display boards that exposed the CCP's crimes helped people to understand the truth. At the other side of the square, practitioners reenacted the torture of organ harvesting from living Falun Gong practitioners. People were shocked by the CCP brutality. After learning the facts, many people signed the petition to help stop the persecution.

After seeing the torture demonstration Caroline said, "It is horrible that people are tortured so cruelly and their organs are harvested. We have to take action to get the governments of all countries to demand that the Chinese government stop this."

Dominique, who was a nurse, said, "You have to speak out. The more you speak out, the better. Let people know that, in the 21st century, innocent people are being tortured. I hope you, those who are suffering, and their relatives have courage. They will not suffer in vain."

Jiang Youlu, the deputy chairman of the China Democracy Party in France, voiced his support for the Falun Gong practitioners' activity. He was rescued from the CCP by his Chinese and French friends through the French Ministry of the Interior. He said, "I met many Falun Gong practitioners in France. They are very sincere. They really follow the principles of truthfulness, compassion, and forbearance. What really deceives people is the CCP. Jiang Zemin claimed that he would eliminate Falun Gong within three months. That did not happen. The CCP picks up a stone and smashes its own foot. They are not only unable to eliminate Falun Gong, but Falun Gong grows stronger and stronger and braver and braver. We, as democracy defenders, really admire them. In addition, the Nine Commentaries on the Communist Party has been responsible for the big push to quit the CCP."

Distributing information about quitting the CCP to Chinese tourists

Tourists from China passed the square from time to time and stopped to listen to the broadcasts from the loudspeakers. Some took pictures. Practitioners seized the chance to distribute materials and the Nine Commentaries to them and told them that more than 40 million people have already quit the CCP. The practitioners advised them to quit the CCP.

“Finland: Practitioners Clarify the Truth and Protest the Persecution on the Occasion of July 20 (Photos)”