On June 12, 2008, Bugun Mersin, a local newspaper in Turkey, published an article entitled "Chinese Communist Regime Persecutes Falun Gong and Harvests Organs for Profit." Based on materials provided by the Falun Dafa Association of Turkey, the half-page article gave a relatively detailed account describing the brutality of the persecution, including the organ harvesting atrocities and the recent violent assaults against overseas practitioners.

On June 9, the same newspaper published an article entitled "What is Falun Dafa." The article, written by a staff reporter, was based on interviews of several Falun Gong practitioners, and truth-clarifying materials provided by these practitioners. In this article, the reporter discussed several topics, including "What is Falun Dafa," The "Truthfulness-Compassion-Forbearance" principles, the "Five Sets of Exercises," and "The Spread of Falun Dafa Around the World." 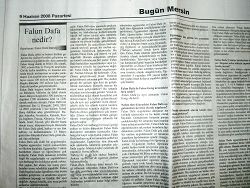 Bugun Mersin published an article entitled "What is Falun Dafa" on June 9, 2008