On July 4, Falun Gong practitioners attended the Independence Day Parade in Evanston, Illinois, which is one of the biggest such parades in the greater Chicago area. 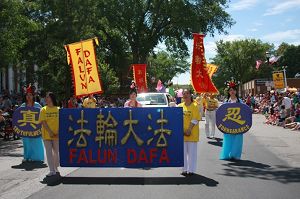 The parade went along Central St. for three miles. One hundred and thirty two groups took part. This year was the eighth time that Falun Gong was represented in the parade.

Practitioners first attended this parade in 2001. They won the first and third place for the best float in 2003 and 2004. They have been invited by the organizers every year, giving local citizens many precious opportunities to learn more about Falun Gong.