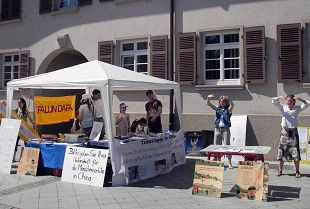 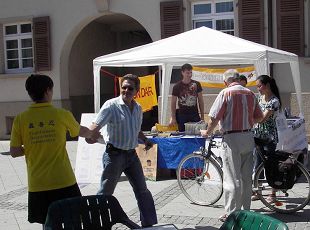 Many passers-by stopped to pick up information 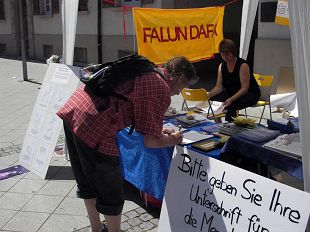 After learning the facts, many people signed the petition calling for an end to the CCP's persecution of Falun Gong

Along both sides of the street, residents were enjoying coffee and basking in the sunshine. Many people came over to read the information boards or ask for leaflets. Some among them were Chinese people. Some people signed a petition calling for an end to the CCP's persecution of Falun Gong.

This is the first time that Falun Gong practitioners organized such an activity in this small border town. When practitioners in yellow exercise outfits first appeared, it aroused the curiosity of many people. This event was the first opportunity for many of the local residents to hear about Falun Gong.

The residents, shocked by the persecution taking place in China, asked the Falun Gong practitioners, "Has this really been happening? It's unbelievable!" The practitioners told them, "What is exposed in these leaflets are actual situations that have taken place or are happening now. Because the CCP is so evil, we are trying to persuade the Chinese people to quit the CCP, turn their back on it, and thus eliminate it."