Poland: Practitioners Raise Awareness of the Persecution in China (Photos)

(Clearwisdom.net) On July 20, 1999, the Chinese Communist Party (CCP) headed by Jiang Zemin launched the persecution of Falun Gong practitioners, who believe in the principles of Truthfulness-Compassion-Forbearance. In those years Jiang exclaimed, "I do not believe the CCP cannot defeat Falun Gong," and also claimed, "In three months we will crush Falun Gong." Nine years have passed, but the result of the persecution is that Falun Gong has widely spread throughout the world, becoming deeply rooted and blossoming in more than eighty countries and regions. 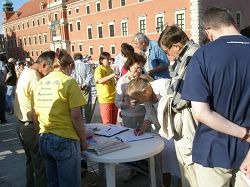 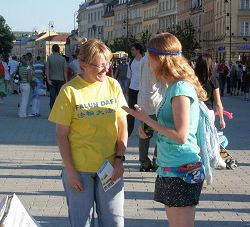 In Poland, the number of Falun Gong practitioners went from none to a few and from a little to a lot. No matter whether the practitioners are Chinese or Polish, the miracles that happened among them were many. All of these are witnesses to the supernatural phenomenon of Falun Gong, and the vast and mighty Buddha's kindness. There are more and more people coming to learn Falun Gong.

On July 20, 2008, Polish Falun Gong practitioners held various activities in order to clarify the facts. Some went to the Chinese market and Chinese restaurants circulating truth-clarifying materials; some went to sit in front of the Chinese Consulate to peacefully protest against the nine years of persecution; some did the group exercises in the park and others went to the Warsaw old city, putting up informational displays and distributing the Polish version of the "Nine Commentaries on the Communist Party".

July 20 was also the deadline for the Global "Million Signatures" collection campaign. A lot of Polish people signed the petition in support of Falun Gong and to call for an end to the persecution. A non-Polish man was taking a walk with his Polish wife. After receiving the truth-clarifying flyer, he asked his wife to translate the contents for him while they were walking. When his wife finished translating, they turned around and came back quickly, signed their names on the petition form and asked how to find the English version of the website in order to get more detailed information.

During the nearly three hours of signature collection, hundreds of people signed their names calling for an end to the persecution of Falun Gong before the Olympic Games. Many Polish people asked questions about the persecution and a number of people expressed an interest in learning Falun Gong.

One of the practitioners also received calls from Chinese people who wanted to learn Falun Gong and wanted to obtain copies of the Chinese version of Zhuan Falun.