The annual Multi-Cultural Festival in Augsburg, Germany was held on July 12th, 2008. Various political, cultural, charity and human rights organizations and groups from more than ten countries attended the festival, among which were Falun Gong practitioners from Germany and Austria. Falun Gong is no stranger to the people of Augsburg, as it was the fifth time that Falun Gong has been invited to attend the festival. Practitioners demonstrated the Falun Gong exercises and participated in the parade, and received a warm welcome from the people of Augsburg. The festival organizers expressed great satisfaction about Falun Gong's participation, and said they hoped that the Falun Gong group would be seen again at the next event. 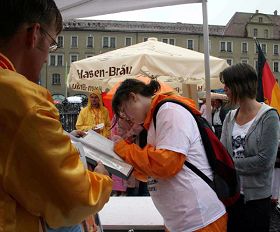 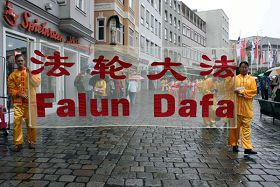 The Falun Gong procession at the Multi-Cultural Festival in Augsburg

A group of secondary school students wearing T-shirts designed by Reporters Without Borders protesting the human rights abuses by the CCP related to the Olympic Games came to the information desk, and they asked to sign the petition for the Global Million Signatures Calling For an End to the Persecution of Falun Gong Before the Beijing Olympic Games. Many people signed the petition that day.

“Inspired by a Fellow Practitioner”