(Clearwisdom.net) "Nine years ago, the Chinese Communist Party launched the persecution against Falun Gong. Every year at this time, we assemble here and light candles together. Although the darkness surrounds us, the candlelight shows that brightness and hope are within us."

On the evening of July 18, Falun Gong practitioners from all over the world held a candlelight vigil in front of the Washington Monument in Washington, D.C., in memory of their fellow practitioners who lost their lives in the persecution. 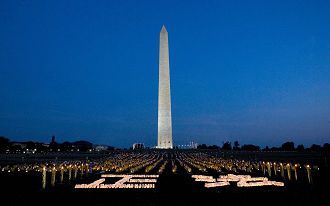 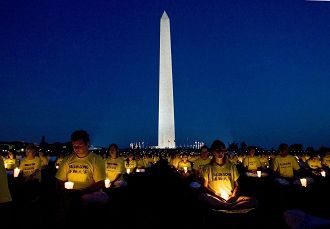 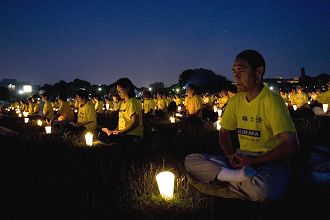 On July 20, 1999, the Chinese Communist Party (CCP) launched the persecution against Falun Gong. Over the last nine years, 3168 Falun Gong practitioners have lost their lives, many tortured to death; 75 of them were people in their eighties, and the youngest was only 8 months old. Thousands of practitioners are currently jailed and being tortured in forced labor camps, detention centers and prisons. The CCP even harvests organs from living Falun Gong practitioners for profit.

Many people have asked why the CCP persecutes Falun Gong. The answer was given in the opening speech at the candlelight vigil: "It is because of fear. The CCP is afraid of one hundred million peaceful practitioners; it is afraid of the principle of Truthfulness-Compassion-Forbearance and it is afraid of practitioners' solid belief. Falun Gong practitioners in China, together with their fellows in 80 countries throughout the world do not give in to violence, and maintain peacefulness in the face of persecution. Their spirit has been dissolving the violent and evil CCP.

"Today, we are assembled here without sorrow or hatred. Although three thousand fellow practitioners have left us, their spirits are encouraging us to finish their task -- clarifying the truth peacefully until the persecution stops. The end of the persecution will come soon. The CCP is living in fear now. It will come crashing down soon."

In the dark, practitioners lighted candles with soft music. The candles formed two Chinese characters: "Rectify [the] Fa." Many people were attracted to the beautiful scene and showed their support for the practitioners.

After learning the truth of the persecution, a couple from India joined the practitioners to show their support.

Kalio watched the candlelight vigil for a long time. She told a reporter, "I lived in Thailand for a year. Some Chinese friends in Thailand asked me to tell them how Chinese people live in U.S.A., and asked me to send them some photos. Now, I have learned about Falun Gong, such a peaceful group. I will send them the photos I've taken tonight. I want to tell them that many people are practicing Falun Gong here."

Jennifer from Los Angeles was moved by the candlelight vigil. "It is a very strong presentation. I have seen many Falun Gong events in California, which were great. But I've never seen such a candlelight vigil," she said. She also asked how she could help practitioners end the persecution.

Over the last nine years, the Washington Monument has witnessed Falun Gong practitioners' journey of peaceful resistance to the persecution.

The CCP claimed that they would eliminate Falun Gong in three months. Now, nine years have passed and Falun Gong has spread to more than 80 countries and has won more than 3,000 proclamations and awards worldwide. Forty million Chinese people have quit the CCP. More and more people have learned the truth of Falun Gong and have recognized the evil nature of the CCP. The persecution did not eliminate Falun Gong, but it will bring about the end of the CCP. Through their lives and actions, Falun Gong practitioners bring the principle of Truthfulness-Compassion-Forbearance to people's hearts and the world.