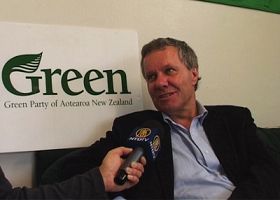 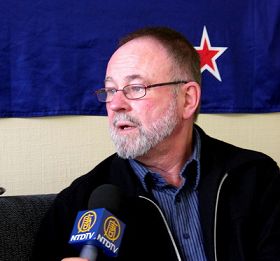 In regards to the Eutelsat situation, Mr. Locke said, "I know the Chinese Communist regime has continuously tried all they could to put a stop to independent external media reports, such as those which give exposure to human rights situations under the Chinese Communist Party (CCP). They do not let Chinese people hear the truth and the facts. For instance a few years ago, the Chinese Communist regime demanded that Rupert Murdoch ban the broadcast of BBC programs. Unfortunately, they compromised under the CCP's pressure. Similar events happened with Google. If under the CCP's pressure, Eutelsat also stops NTDTV's broadcast to China, that would be terrible. Eutelsat should immediately restore NTDTV's broadcast. The CCP is dictating and controlling the freedom of democracy because of different opinions that do not align with CCP interests; the Chinese Communist regime must immediately implement freedom of press before the Olympic Games! It is not only Eutelsat, but also the New Zealand and other Western governments who are making compromises with the CCP. This is because they care too much for personal interest, and they feel by doing that, they could gain the benefits of trade with China. However, the Greens feel human rights is more important. If human rights is the foundation of our starting point, and placed as first priority, we will have a better and longer lasting relationship with the Chinese people. This is because Chinese people want to have human rights, and wish for support from the government and people of New Zealand."

Secretary of the Kiwi Party Mr. Bernie Ogilvy expressed that he was not surprised that Eutelsat shut off NTDTV's broadcast to China on the W5 Satellite. Mr. Ogilvy felt it was a common tactic of the CCP to persecute compassionate people with tyranny. He said that the CCP's attempt is very misleading, because China's economic development has not brought benefits to the wider population of China (including cheap labor and forced labor at no cost). Furthermore, the CCP continues live organ harvesting for profitable sale, and persecutes Chinese people through torture. Mr. Ogilvy recommended that the leader of every country say to the CCP, "You have signed many international human rights agreements, why don't you implement them?!"

According to Mr. Locke, currently there is much focus on human rights in China, because with just a few weeks remaining before the Olympic Games, the CCP not only continues to persecute Falun Gong practitioners, but also human rights lawyers. Some have been arrested, and are still under detention. Also, ahead of the Olympics, the CCP has intensified persecution of other ethnic groups such as the Tibetans, hundreds of thousands of whom are suppressed. This is because the CCP is afraid of righteous voices, and fears that people will hear voices which condemn the CCP.

Mr. Locke said that during the Olympics, if the atrocious persecution of Falun Gong practitioners continues to take place, to New Zealanders, this would be unacceptable. In reality, the CCP has continuously tried to display its superficial prosperity, and disallow Chinese people from learning the truth. The CCP wants to control all people. The CCP is a dictatorship, Falun Gong is independent. Of all the persecution under the CCP, Falun Gong practitioners have suffered the most brutal suppression. The CCP persecutes not only its own people, but also people in other countries such as Sudan.

Keith Locke also feels that petitions are a great way of action, very inspiring, and a good method to let the public understand the truth and facts. Petitions are also time consuming, and require detailed explanations. When he learned that within two months, 28,000 signatures were collected in New Zealand, Mr. Locke said, "Many New Zealanders place much importance on human rights, but unfortunately this has not gathered enough attention from the New Zealand government." He feels that the New Zealand government should publicly condemn the CCP, as it would be more effective, and bring stronger protection for the groups [such as Falun Gong] heavily persecuted by the CCP.

“Japan: People in Sapporo Support Signature Drive Calling for an End to the Persecution”