In the run-up to the "Global Quitting the CCP Day," activities supporting the 39 million Chinese people who have withdrawn from the Chinese Communist Party (CCP) and its affiliated organizations were held in nine cities in Germany on June 28th, 2008. These cities include Berlin, Hamburg, Hanover, Duisburg, Cologne, Frankfurt, Heidelberg, Stuttgart and Munich. Many people signed a petition to support the "Millions of Signatures Global Campaign" urging the Chinese Communist regime to put an end to the persecution of Falun Gong before the opening of the Beijing Olympic Games. 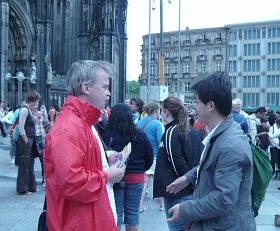 In front of the Chapel in Cologne, a Falun Gong practitioner (in red) is discussing the movement of quitting the CCP, and exposing the persecution of Falun Gong to a Chinese person 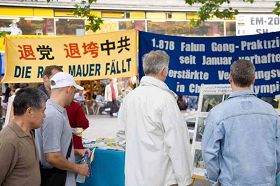 In Berlin, people stop and read the posters and banners 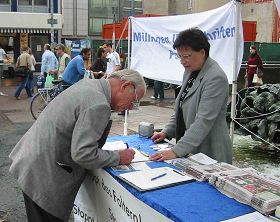 In Hanover, a passerby signs the petition calling for an end to the persecution of Falun Gong before the Olympic Games 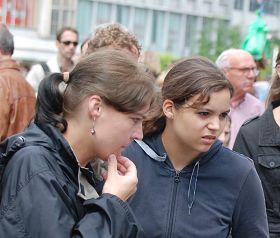 In Hanover, passersby are stunned upon seeing torture methods re-enacted at the anti-torture exhibition 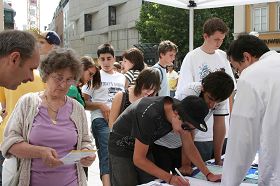 In Munich, the Quit the CCP Service Center Booth attracts people from all walks of life

In Munich, a display depicting CCP atrocities attracts a lot of attention

Several elderly Germans identified themselves as former Mao supporters from the 1960s, as they didn't know what was really happening in China during that period of time. However, with the gradual exposure of the facts coupled with a great deal of contemplation of the matter over the past decades, most of them have become anti-communist. They thus signed the petition to call for an end to the persecution of Falun Gong.

One man said, "I am happy to see the establishment of the Service Center for Quitting the CCP. It is important that finally there are people who are fighting the last bastion of communism in the world."

As the Duisburg Police Bureau had already heard about the incident in which Falun Gong practitioners in Flushing, New York were attacked by Chinese people incited by the Chinese Consulate, the police reinforced its security measures to protect Falun Gong practitioners throughout the activity. A plainclothes policeman asked the practitioners at the Service Center if they had been harassed by anyone. He said that some Chinese students might make trouble once they saw any anti-communist activities, and told the practitioners, "If they harass you, please let us know as soon as possible."

There are over 2,000 Chinese students studying in Stuttgart, an industrial city in Germany. Every summer vacation, many Chinese students go to Stuttgart for part-time jobs. A volunteer of the Quit the CCP Service Center in Stuttgart said, "Nowadays most of the Chinese students have a very good attitude and are willing to accept our information about quitting the CCP and the Nine Commentaries on the Communist Party. One volunteer personally persuaded 8 or 9 students to quit the CCP organizations."

Western students showed much interest and concern about the human rights situation in China.

A high school exchange student from France very carefully looked at the large photos depicting the CCP's persecution of Falun Gong and Chinese people. He told Falun Gong practitioners, "I know that CCP media only say good things about themselves and never report this kind of news." After leaving the booth, he came back a few minutes later to ask practitioners for Falun Gong website addresses so as to hyper-link them to his personal website in order to let more people know about the persecution of Falun Gong.

Zuher Jazmati, an 18-year-old high school student, was attracted by the banners regarding China's human rights situation. He immediately came over to ask for a copy of all the literature in both German and English and said, "At the fall of the Berlin Wall, I was only one week old. But when I grew up, I read a lot of articles about what had happened during the communist rule. Every communist nation has very severe human right violations. Fortunately, most people are against this autocratic regime."

Munich, the famous city in southern Germany, has long been a destination for tourists, including many people from China. Several Chinese people filled out the declaration form to quit the CCP, and some took photos in front of the banners about quitting the CCP. Several accepted the Nine Commentaries and said that they would read it carefully. Several people said very gratefully to the volunteers at the Service Center, "Thank you for your efforts," and some shook hands with the volunteers to show their support.

One young Chinese tourist listened to the volunteers' explanation about the significance of quitting the CCP. He kept listening very seriously. When his friends left to go shopping, he told the volunteers quietly, "More than twenty people in my family have quit the CCP. My mom practices Falun Gong." The volunteers were very happy and asked him to send their greetings to his mother.

The European Cup was recently held in Switzerland and Austria and many soccer fans visited Munich. Many tourists and soccer fans signed the petition upon learning that the purpose of the activity was to stop the CCP's persecution of Falun Gong. After learning about the CCP's harvesting organs from living Falun Gong practitioners, soccer fan Roland Vollodet said, "Nothing is worse than this. This is the extreme end. This kind of thing definitely can't be allowed to continue."

A Chinese woman changed her rigid mindset after she came across Falun Gong practitioners for the second time. Formerly, she didn't believe that the cruel torture methods displayed in the photos happen in China. A practitioner told her, "The CCP is not China. What Falun Gong practitioners have done is to expose the Chinese regime's atrocious deeds, and it is by no means meant to insult the Chinese people. The German people are quite clear about this. As a result, what Germans have criticized is the fact that the Chinese regime abuses human rights and suppresses Chinese people."

The practitioner also reminded the young woman that the CCP Party culture is not Chinese culture. Finally, the Chinese woman accepted a copy of the Nine Commentaries and the newspaper covering the incidents in Flushing, New York.

Cologne: After a permanent Quit the CCP Service Center was established, Chinese quit the CCP on the spot

Cologne is a city along the Rhine, and it is also a well-known tourist destination. Falun Gong practitioners from Cologne and nearby cities set up the Service Center to Quit the CCP in the square in front of the Cologne Church several days per week. Many Chinese tourists have withdrawn from the CCP or its affiliated organizations.

Hamburg: A German who realized the evil nature of Communism said, "Good for you! We support you."

As Hamburg was once situated on the border between East Germany and West Germany, its residents are especially knowledgeable about the East German communists' inhumane nature. Therefore, local residents are more than willing to accept fliers distributed by Service Center volunteers and many signed the petition to stop the human right persecution in China. Upon learning that the Service Center was meant to help Chinese people to quit the CCP, they gave the thumbs up to the practitioners and said, "Good for you! We support you."

“I Gained a New Life After Practicing Falun Gong”