My name is Huang Kui. I enrolled in a Ph.D. program at Tsinghua University in 1999. On December 16, 2000, I was illegally arrested at Zhuhai City in Guangdong Province. On December 18, I was transferred to the notorious Zhuhai City No. 2 Detention Center where I was tortured. 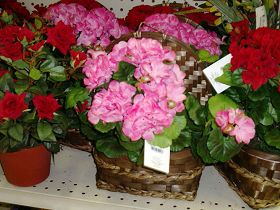 Plastic flowers produced at Zhuhai and exported to United States supermarkets. They were labeled "Made in China."

At about 10:00 p.m. on December 18, 2000, police officers took me to Zhuhai City No. 2 Detention Center. I had to pass through several gates. The further I went into the detention center the gloomier were the surroundings. When I finally saw some light, two giant dogs, taller than a person, with mouths gaping wide open appeared in front of me. Being "escorted" by police officers and giant dogs, I arrived at cell no. 27 in bare feet. After the door opened, I was pushed into the cell. There were already twenty inmates in that cell.

A cell of twenty square meters was filled with green leaves. I was ordered to squat down and learn how to do the work. The green leaves are used in the production of export products, produced by inmates. A guard was shouting, "Overtime today!" Then, the inmates began to sigh. Working overtime meant that they had to work until midnight. By the time they had cleaned up and taken showers, it was already past 1:00 a.m., and they had to get up again at 5:30 a.m.

After a quick bathroom and restroom visit, brushing teeth, they had to rush to get the materials for making plastic flowers. Once everything was set up, they began working. It was hard labor! The daily quota is very high, and anyone who did not meet the quota was beaten, cursed at, or tortured. Torture methods included "flying an airplane" and sleep deprivation. The quota had to be met. The inmates whispered among themselves, "Making plastic flowers doesn't kill a person. Fatigue doesn't kill a person either, but beating a person can kill a person."

Inmates at Zhuhai Detention Center make plastic flowers for export. When the heart of a plastic flower goes through flower leaves or green leaves, it's counted as one towards the quota. The daily quota is 10,000-14,000, or even higher. In addition, everyone has to get ready all the materials for making the flowers. In order to save time, restroom visits are kept at a minimum. Permission for each restroom visit had to be obtained. As permission was seldom granted I often became constipated.

I spent two years at the Zhuhai Detention Center. During my detention, I produced all kinds of plastic flowers. Some had an electronic device for playing music. In addition, I made colorful lamp strings, and pearl strings, for desk lamps and other uses. All products were exported. As a matter of fact, the prison benefits more from producing items for export, therefore the quotas were continually increased. After I came to the United States, I saw many of these plastic flowers and colorful lamp strings with the label "Made in China" in supermarkets.

Prisoners were full of hatred. However, they dared not show their anger, so they cursed the flowers. For example, they called the plastic flowers "dead people's flowers." The flowers were difficult to produce. Our hands were full of small blisters which developed into large blisters. When they broke open they caused tremendous pain, and the pus and blood penetrated onto the plastic flowers. In addition, they often had to use a small tool called a "flower tool." This tool is a fine metal pick which is very sharp at one end. It hurt the hands a lot. Blood from injuries, along with sweat and tears dripped onto the plastic flowers. As the prisoners had all kinds of contagious and sexually transmitted diseases, you could imagine what the flowers became.

No one outside the forced labor camp can imagine what it is like. It is not easy to push the center of the plastic flowers through the base. A "smart" prisoner thought of lubricating the flower. They saved the vegetable oil bags from instant noodle packages, or saved a bite of very greasy pork from their meals. When they lubricated the centers of the plastic flowers with pork oil, it became easier to make the flowers. However, this method was prohibited, because during shipment the flowers that had pork oil on them could be damaged by worms. Therefore, when a guard caught someone applying pork oil to the flowers, he would cruelly punish the offender. The torture method was "flying an airplane." The prisoners came up with another method. Peoples' heads are often oily, so they rubbed the plastic flowers across their heads, as if scratching them. This helped making the flowers easier.

Between November and December 2001, it was very cold in Zhuhai City. There was a flower that appeared easy to produce, but our cell was rarely lucky enough to be assigned to make these flowers. Because of the cold temperature, the materials became very stiff. It was very hard to break them apart. After some time, the skin cracked at the finger joints. Often the crack was so deep that bones became visible, fingers almost broke, and at night, the pain often woke us up. There is another kind of flower called "Stars All Over Sky." It is made of many small flowers and forms a big flower. A small flower is only as big as a pellet of rice, and make them was hard on the eyes. I felt very dizzy at night. In September 2002, because of long-term fatigue, I developed pus underneath my right eye and around my eyelids. When I was making flowers, the pus kept dripping into the flowers. Also, the flowers were covered with a golden powder, and the powder covered us from head to toe. It itched and was difficult to endure.

Guards from the detention center forced us to crack pistachios despite the dirty environment. Pistachio has a strong shell outside, which needs to be opened with external force. We worked from morning until evening, and it was very heavy work. My right hand developed blisters which became large and bloody. This caused excruciating pain. Prisoners said that the pistachio turned into bitter fruits. In order to not break the whole shell, prisoners often had to soak them in water to soften the shells. Because of anger and resentment, they soaked the pistachios in their urine. Pistachios labeled "Made in China" were sold in U.S. supermarkets.

The largest cell at the Zhuhai Detention Center is only a little over 20 square meters in circumference, yet, the guards jam twenty inmates into this cell. There is a tiny washroom, with a faucet in the corner. There is also a small window for serving of meals. Over twenty people have to eat and sleep in this tiny cell. It is hard to imagine what it is like. When sleeping, bodies are pressed against each other. It is rather unpleasant in winter and summer. One receives only two meals a day, which consists of some unclean rice, a few boiled vegetables and a small piece of very greasy pork. Before the meal, inmates have to recite the prison rules loudly. One has to eat within ten minutes and then resume work. The cell is littered with the unfinished, finished and thrown away materials. When using the restroom, one has to climb over a pile of that material. Additionally, the cell is not cleaned and thus is very dirty.

Not everyone can survive in such a place. I witnessed one prisoner who died soon after he arrived. He wasn't beaten to death by inmates but just couldn't live in such an environment. It is just as guards said, "If you die in here, your death is not valued more than that of a dog." They carried him out of the cell in the bed sheet. Some prisoners tried to commit suicide. They stabbed their abdomens with sharp sticks. They were carried from the cell and the wounds were bandaged. Then their hands and feet with tied together with steel chains.

The headcount is very important. We were required to squat down and hold our hands to report dozens of times. When we were speaking with a guard, we had to squat down as well. Guards and military police officers searched our cells without any warning. Inmates had to strip often under the blazing sun. Dignity was an unknown word. Video cameras were installed in every cell, to prevent Falun Gong practitioners from doing the exercises. But, it was also so that the depraved guards could watch female inmates when they used the restroom.

Another way guards make money is selling commodities to inmates at high prices. A cooked dish costs at least 40 yuan. Sometimes, we were short of daily commodities, such as bathroom tissue. We could only clean ourselves with water after a bowel movement, or with cloth leaves from the plastic flowers. After that we used our hands to make flowers and open pistachios.

Whenever there was an inspection, inmates had to hide all the materials for making plastic flowers. The guards wanted to show the world that inmates did not have to work at the Zhuhai Detention Center. The minute they left, we were forced to work again.

“Practitioners Arrested by 610 Office in "Preparations for the Olympics" (Dagang District, Tianjin City)”

“Coordinate as One Body to Rescue Fellow Practitioners”