Japan: Two Parades Held in Kobe and Osaka to Support the Withdrawals from the Chinese Communist Party (Photo)

(Clearwisdom.net) On June 15, 2008, the Service Center for Quitting the Chinese Communist Party (CCP) in Kobe, Japan, organized two parades in Kobe and Osaka to support the 38 million withdrawals of Chinese citizens from the CCP. The attendees condemned the CCP's attacking and assaulting of Falun Gong practitioners in Flushing, New York. During the parade, the attendees held banners which read "Heaven eliminates the CCP; Heaven blesses China"; "Supporting 38 million withdrawals from the CCP"; "Strongly Condemn the Violence against Falun Gong Overseas." 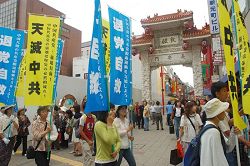 The parade passes through Chinatown in Kobe

Many people watched the parade. Practitioners passed out a lot of truth-clarifying materials. Many Japanese people supported the withdrawals from the CCP, and encouraged the volunteers of the service center to keep up their efforts. A Japanese woman told the reporter that she saw a similar parade in New York two weeks ago. She took some English materials, but she cannot read them. She was glad to get the materials in Japanese. She said in New York, she saw Chinese, American, African-American and other people in the parade. The parade was peaceful and left a deep impression on her. She was glad to have a chance to learn more about it today.