(Clearwisdom.net) A four-day long "Truthfulness-Compassion-Forbearance" Art Exhibition was held on April 29 - May 2 in the city of Yokkaichi, in Mie Prefecture, Japan.

Yokkaichi is the largest city in Mie. The population of this industrial city is three hundred thousand.

Local Falun Gong practitioners held the 12th international "Truthfulness-Compassion-Forbearance" Art Exhibition at the City Culture Center, which attracted many citizens. The local newspaper interviewed and reported on the event. 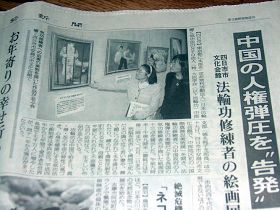 Newspaper report about the exhibition

The report, entitled "Exposing the Human Rights Violations in China," introduced the exhibition. It briefly described several artworks, including "Suffering in China," "Poisonous Injection," and "Why?" It quoted a viewer who said, "The persecution of Falun Gong in China is really brutal." Finally, the report introduced Falun Dafa, and its spreading around the world.

Many people came to the event. One of them wrote to practitioners: "I enjoyed great artworks today. I was very touched by the stories. They will be meaningful for the rest of my life. I will read the book Zhuan Falun carefully, which will be the guide in my life."

Also, many citizens signed their names to support the Falun Gong practitioners.