(Clearwisdom.net) On May 20, 2008, under the direction of Zhou Yongkang, Secretary of the Political and Judicial Committee of the Chinese Communist Party (CCP), the CCP misrepresented the truth in order to motivate Chinese people both inside and outside of China to hate Falun Gong. In reports from the Xinhua News Agency and on Chinese Central TV (CCTV) broadcasts (both Party-controlled media), the CCP spies' violent attacks on volunteers at the Flushing Service Center for Quitting the CCP were described as "New York Chinese Collect Donations for Sichuan Earthquake Victims As Falun Gong Interferes," totally misrepresenting the truth to the people in China.

In the CCTV news, no banners relating to collecting donations could be seen, but there were banners and some spectators supporting the rally to quit the CCP.

On the afternoon of May 17, the Global Service Center for Quitting CCP held a rally to support 36 million Chinese people who have quit the CCP and its affiliated organizations in front of Flushing Library. CCP spies initiated a confrontation and instigated a violent attack on one 70-year-old retired Chinese engineer. Some thugs even called for more people to join the attack, "Get more people to come. Each will be paid ninety dollars."

On May 19, World Journal carried news on the incident with the title "Falun Gong Criticizes the CCP," which did not mention donation collection.

But the content was changed in China. The rally for quitting CCP that Falun Gong practitioners obtained permission for from the New York Police Department was intentionally changed to: "New York Chinese Collect Donations for Sichuan Earthquake Victims." The content of the news did not match the video, which showed banners worded "Quit the CCP for a Safe Future," etc. 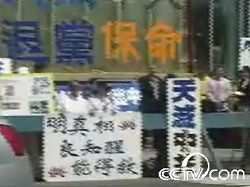 CCTV news picture shows banners worded "Quit the CCP for a Safe Future" and "Heaven Will Destroy the CCP," which demonstrated it was a rally to support quitting the CCP and not a rally to collect donations. 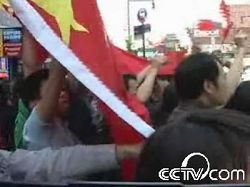 This is a picture from the CCTV website about the people at the rally in Flushing on May 17. CCTV called them "local residents out shopping." Actually, the number of people was near one thousand, and many of them were from Boston and Philadelphia. As soon as the noise started, CCTV cameraman started video footage of the scene. The CCP organizers quickly distributed CCP flags to their paid collaborators to fabricate a scene that they loved China. The picture was relayed widely in the Chinese media.

New York participants hold a rally like this almost every month, regardless of the weather. This time, at the beginning of the rally, the host asked for silence for those who had lost their lives in the recent Sichuan earthquake, and almost all the speakers expressed their concern for the earthquake victims. No mention of these statements was made in the CCTV news coverage, which falsely claimed the event was to collect donations.