(Clearwisdom.net) Recently, several hundred Chinese people surrounded and attacked Falun Gong practitioners and volunteers at the Service Center for Quitting the CCP in Flushing, New York. In order to protest the unprovoked attacks, Falun Gong practitioners in San Francisco gathered in front of the Chinese Consulate at noon on May 21, 2008 to condemn the CCP for attempting to take advantage of the earthquake in China to escalate the persecution of Falun Gong. It is believed that CCP agents attempted to cause a split in the Chinese community by fomenting these violent incidents. 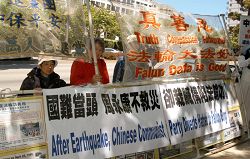 Commentator Lan Shu of Sound of Hope International Radio Broadcasting pointed out, "Many deaths and injuries from this disaster are actually due to the CCP's negligence regarding an earthquake forecast. Within 72 hours after the earthquake, the CCP did not conduct rescue efforts wholeheartedly, but denied entry of rescue teams from other countries. The people are angry, so now the CCP is diverting the anger among overseas Chinese people towards Falun Gong and buying time for itself." 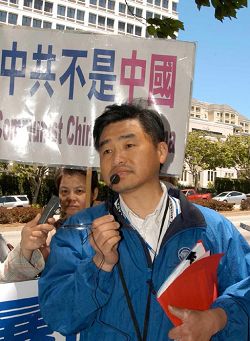 Mr. Lan said that there is a well-known book called, "Common Sense" by Thomas Paine, who wrote that it is patriotic to protect a country from harm from its government. Mr. Lan said, "The CCP is interested in saving itself. We overseas Chinese are interested in what's best for those victims." 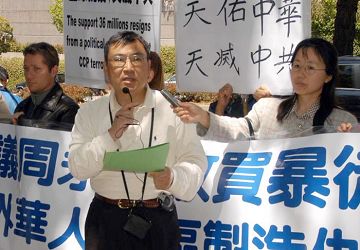 Ma Youzhi, director of the San Francisco Service Center for Quitting the CCP, said that the service center was set up in 2005. It opened a hot line for people in China to quit the CCP and its associated organizations. He said, "We volunteers at the service center call for conscience and justice from all Chinese people. I hope that the Chinese people will quit the CCP and its associated organizations and have a safe future."

A San Francisco businessman said that the CCP's action is hooliganism and illegal. Such thuggery will not have the expected effect and cannot last long. Since May 16, the Service Center for Quitting the CCP in Flushing, New York has been attacked by several hundred people, some of whom attacked the volunteers at the service center. Police have arrested two perpetrators. The New York Police Department and FBI are investigating the incidents.