(Clearwisdom.net) On the afternoon of the 11th of May 2008, Falun Gong practitioners in France gathered on the Parvis de la Liberté et des Droits de l'Homme opposite the Eiffel Tower in Paris to celebrate the 9th World Falun Dafa Day and the 16th anniversary of Falun Gong's public introduction. Peaceful exercise demonstrations, and beautiful dances and music attracted many local residents and tourists from around the world to celebrate this special occasion with practitioners. 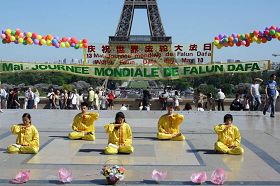 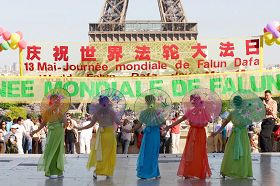 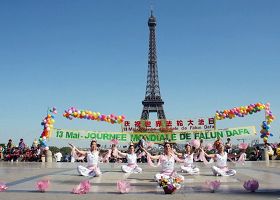 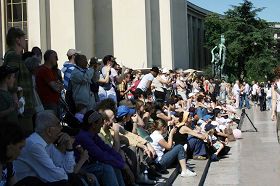 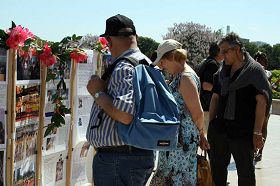 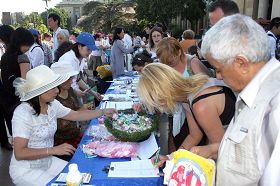 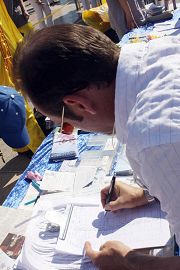 Since the 13th of May 1992 when Mr. Li Hongzhi introduced Falun Gong to the public in Changchun, China, the practice has spread to more than eighty countries and regions throughout the world. Nearly one hundred million practitioners have benefited physically and mentally by following the principles of Truthfulness, Compassion and Forbearance. Practitioners around the world decided to make May 13 World Falun Dafa Day. Since then, practitioners around the world celebrate this annual festival in various ways. Falun Gong's founder Mr. Li Hongzhi's first stop overseas was France. Practitioners in France thank Master for his benevolent salvation and wish Master a happy birthday.

A long-time immigrant from China, Ms. Huang, who attended Mr. Li Hongzhi's first Falun Gong class held in Paris in 1995, said, "I attended Master's first class in France, which deeply impressed me. Since I started the practice, I have learned many of life's truths from Master. I had been searching for the meaning of life without success. My biggest gain was that Dafa showed me the way. As a result, I am very grateful for Master's salvation. I am very happy today as it is World Falun Dafa Day. Each year there are warm celebrations. On behalf of my entire family, I send our regards to Master and wish him a happy birthday."

Ms. Huang condemned the Chinese Communist Party (CCP) and Jiang Zemin and his gang's brutal persecution of Falun Gong, calling upon kind people all over the world to work together to stop the persecution. She said, "The reason why we hold the activity at the Eiffel Tower is to call upon the world to stop the persecution. I think it is a wonderful thing to practice Truthfulness, Compassion and Forbearance. The CCP's persecution is irrational. Chinese people can only have hope once the persecution stops. Seeing practitioners in mainland China being persecuted, we feel very sad. Witnessing their plight saddens us deeply each time."

Talking about her cultivation experience, she said, "I see life differently now, knowing what to do in this life. Before, I felt a sense of emptiness, not knowing what life was about. Now I know. Also, there are fewer conflicts. Before, I fought for even the smallest interest. Now, I understand that these are all trivial."

A western practitioner, Eric Gansailler said, "In 2005 I started practicing Falun Gong after learning about the practice on the Internet. When I found Truthfulness, Compassion and Forbearance, I knew that was what I needed."

An Israeli practitioner, Remi who lives in Paris with his family said, "Truthfulness, Compassion and Forbearance brought us benefits, but Falun Gong is persecuted in China. We hope to stop the persecution as soon as possible."

Falun Gong dancers performed beautiful Chinese dances to showcase the beauty and elegance of Dafa. Remi's wife Mihale was one of them. She said, "I am very glad to attend the festivities today. Meanwhile, I cannot forget those practitioners being persecuted in China. It is very important to let people know the beauty of Falun Gong."

Ms. Chen, who started practicing in 2004 said, "Before, life was a routine. Since learning Falun Gong, my whole life has changed. In fact, life is for cultivation and to return to one's true self. Since beginning cultivation, my respiratory diseases that caused me discomfort disappeared. Now I enjoy a happy life."

French public supports an end to the persecution

In July 1999, out of fear of Truthfulness, Compassion and Forbearance the Chinese Communist Party (CCP) and Jiang Zemin started a brutal persecution of Falun Gong practitioners. Through nine years of peaceful and rational anti-persecution efforts, Falun Gong practitioners have clarified the truth throughout the world. More and more people have voiced their sense of justice and condemned the crimes of the CCP, calling upon the international community to adopt measures to stop this persecution.

M. Patel, a commercial attaché in Paris, said, "I think it is terrific to introduce Falun Gong here (at the Parvis de la Liberté et des Droits de l'Homme in Paris) through peaceful means like dancing. I hope Falun Gong will enjoy great fame not only in its own country but also all around the world. I would like to stand by Falun Gong."

When asked whether Mr. Patel knew that such a wonderful practice is being persecuted in China, he answered, "Yes, I heard about the persecution in China. I also know about the torture and organ harvesting that the CCP regime inflicts upon them. I think these are barbaric atrocities!"

Having signed the Million Signature Campaign to stop the persecution, management assistant Madame Marlanda commented, "I feel the persecution is too brutal to be described by any language. I was stunned. In 2008 there are still innocent people who are killed. I hope this can be stopped immediately. I just signed to support Falun Gong, leaving behind my contact details. I hope it can be of help."

Seeing some Chinese tourist dodging on the square, Ms. Marlanda regarded Falun Gong practitioners' truth-clarification materials as very precious. She hoped that all Chinese people could learn about these crimes that are covered up by the CCP. She said, "Those Chinese people should open their eyes and hearts to learn about this." She added, "Let us act immediately to correct everything."

Falun Gong practitioners also distributed exquisite paper lotus flowers with bookmarks that introduce Falun Gong as well as colourful balloons with, "The World Needs Truthfulness, Compassion and Forbearance." Adults and children alike accepted the practitioners' gifts in high spirits, sharing the festive atmosphere of this special day. Practitioners hoped that more people could learn of the beauty of Falun Gong in this way, that the truth could be spread to all corners of the world, and the message of the lotus flowers, representing holiness and purity, could flourish in everybody's heart.