Canada: Mayor Stewart Young of the City of Langford Proclaims the Month of May 2008 as Falun Dafa Month Honouring Truthfulness, Compassion and Forbearance (Photo)

, Falun Dafa is an advanced exercise and meditation practice of mind, body and spirit that has brought health and well-being to people across Canada; and

, Falun Dafa practitioners practice the principles of Truthfulness, Compassion, Forbearance and incorporate it into their daily lives, striving to become better people in all environments and situations; and

, Mr. Li Hongzhi, the founder of Falun Dafa, is to be commended and publicly recognized for his commitment to promoting better health and moral living throughout the world; and

, the Chinese Communist Party's persecution of Falun Gong practitioners represents a severe example of the violation of human rights and civil liberties; and

, I, Stewart Young, Mayor of the City of Langford do hereby proclaim the month of May, 2008 to be:

in the City of Langford, Province of British Columbia. 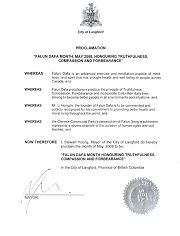