May 13th was the 9th World Falun Dafa Day, and it was also the 16th anniversary of Mr. Li Hongzhi's public introduction of Falun Dafa. On May 11, Falun Dafa practitioners in Houston held a celebration activity in Chinatown, wishing Teacher a happy birthday. 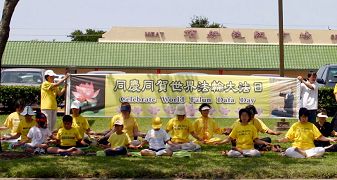 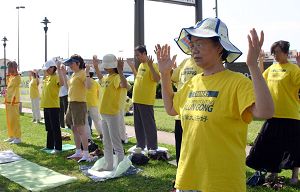 Since May 13, 1992, when Master Li Hongzhi began to teach Falun Dafa publicly for the first time in Changchun, Master has given 220 seminars. "Truthfulness, Compassion and Forbearance" has been spreading throughout the world. Millions of people of different races, nationalities, ages and walks of life have lifted their morals and have taken up the path of returning to their true selves. Now, sixteen years later, Falun Dafa has been spread to more than 80 countries and regions. May 13 has become a holiday for a global celebration of Falun Dafa.

On May 11, practitioners from Houston gathered in Chinatown. They held banners with the words, "Celebrating World Falun Dafa Day," and "Falun Dafa - Truthfulness, Compassion and Forbearance," and did the exercises together. The peaceful music and movements attracted many passersby. Some asked about Falun Dafa and many wondered why the Chinese Communist Party persecutes such a peaceful practice.

Mr. Xu, an electrical engineer, said, "It is such a special date. I have been practicing Falun Dafa for 12 years. After I started practicing it, I knew the real purpose of human life." He said Falun Dafa taught him the difference between good and bad, and he has corrected his previously bad behaviors.

Ms. Chen said, "I started practicing Falun Dafa at the end of 1997. Before that, I had gynecologic cysts. I tried all kinds of medicine and had operations when I was in China. But the illness reoccurred when I came to the U.S. Luckily I learned the Fa. After I started to practice Falun Dafa, all of the symptoms disappeared. I obtained a healthy body, as well as the Fa itself. I know it is so good, not only for individuals, but also for the whole of society. I continue to practice Falun Dafa. I sincerely thank Master."

In Mr. and Mrs. Lin's family, there are 13 Falun Dafa practitioners. Mr. Lin said excitedly, "My wife and I obtained the Fa in December 1996. It was Christmastime and my sons and son-in-law all came to visit us. They saw that we were doing the exercises and asked what we were doing. We told them it's Falun Dafa and it is really good. They wanted to learn too. Other relatives in other states and Taiwan heard about it and wanted to learn as well."

Mr. Chen is a young man. He said happily, "I have been practicing for 9 years. Both my body and my mind have been changed. I am now happy wherever I am. I know how to face difficulties."

Ms. Tang, a software engineer said, "The largest benefit for me from Falun Dafa is that I understood the purpose of life, which I had been looking for, for many years before. I read many books in many fields, in Chinese and English, but I did not get what I was looking for. Some looked good, but they were still not what I wanted and they did not solve my problem. In 1997, I read the book Zhuan Falun on the Internet. I knew that this is what I wanted. It solved my long-standing problems. I started to cultivate, and my life has become richer and more colorful."

Ms. Tang said that Falun Dafa has benefited millions of people. But the Chinese Communist Party is still continuing the persecution in China. She hopes the persecution will end soon.