Pfronten District Director Josef Zeislmeier and his wife went to see the Divine Performing Arts Chinese Spectacular in Munich, Germany, on April 18, 2008. They drove nearly 200 kilometers from their home to see the show. Pfronten is a small town in the Bavarian Alps. 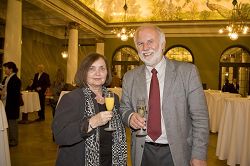 Three months ago Mr. Zeislmeier heard about the show when a Falun Gong practitioner visited him at his office. They talked about Falun Gong, why the CCP persecutes Falun Gong, the persecution situation in China, the live organ harvesting crimes, Nine Commentaries on the Communist Party the waves of people who have withdrawn from the CCP, and the show.

Mr. Zeislmeier was looking at the NTDTV Chinese New Year Global gala album and stated that, if time permitted, he would see the show.

On April 18, 2008, before the show started, Mr. Zeislmeier happened to meet the Falun Gong practitioner who visited him, and they greeted each other. After the show, Mrs. Zeislmeier took the practitioner's hand, and with tears she thanked him for letting them know about the show.

"The show is so pure, graceful and harmonious."

Mrs. Zeislmeier was still very excited when interviewed by a reporter and said, "The show is very moving, very educational, and cleanses one's heart and soul. I had a feeling this show is extraordinary. It deeply moves people, makes us think, and inspires people to generate the most wonderful feelings."

"Some ordinary shows stimulate one's instinct; this show is so pure, graceful and harmonious, and it has a penetrative power and moves one deeply."

"It is time for me to face this problem"

He expressed: "The show is extraordinary, pure,with a quality suggesting of poetry or painting. It is a perfect mix of classical and modern. The drums, singings and dances are very successful."

“My Understandings on How to Help Fellow Practitioners”