After the Chinese Embassy pressured the Swedish authorities to cancel the Divine Performing Arts Chinese Spectacular in Sweden, demand for the tickets to the show in Linkoping on March 27th spiked. The show was sold out two weeks before it was to open. After the show concluded with "the Power of Awareness", the performers were met with long, warm applause. They answered two curtain calls for the appreciative audience.

Sweden is a democratic country famous for its dedication to freedom and human rights. After hearing about the Chinese Communist Party's (CCP) attempts to block the show, people flocked to the show. Among them were seven Members of Parliament from ï¿½stergï¿½tlands, who came to see the show together. Many voiced their support for the show, including MP from the Swedish Center Party Staffan Danielsson and his wife.

After seeing the Chinese Spectacular, MP Staffan Danielsson praised the show, "The program was awesome, with diverse, traditional Chinese culture. I am very pleased to see the show here in Sweden." 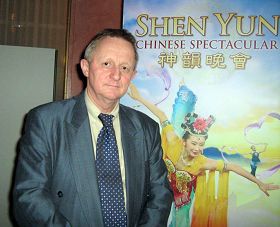 Referring to the Chinese embassy's interference with the Chinese Spectacular in Sweden, Mr. Danielsson said that freedom of speech is essential, and it is his duty to defend freedom and democracy. He added, "China is an autocratic regime controlled by only one party. It tried to threaten the Swedish authorities to follow its instruction on what should be seen by the Swedish people. The Parliament resolved that we would come to see the show, so as to let the Chinese government know that it is wrong to deprive people of freedom of speech and freedom of culture."

When asked about the show itself, Mr. Danielsson said, "This is a small world, and we all have a lot to learn from each other. I really appreciate these artists' magnificent performances. I hope that the Chinese Spectacular can be performed in China some day."

Retired engineer: "We came to support the show due to the Chinese Communist regime's interference."

Retired aircraft engineer Mr. Curl Ojurstrom went to see the show with his wife on the evening of March 27th. He said that he found out about the show because of the Chinese Communist regime's interference. "We came here to support the show, and we are happy to be here as the Chinese Spectacular did do some good for me. I know some parts of it are not liked by the Chinese regime, but we like them."

Mr. Curl Ojurstrom enjoyed the drum performance and the Mongolian Bowl Dance the most, and he was very much impressed with the show as a whole. His wife Lena Ojurstrom, who is a therapist, said that she was amazed by how the dancers formed beautiful formations so quickly. She said, "I enjoyed all the numbers and hope that such performances are able to help people further understand traditional Chinese culture."

One of the show's organizers said, "The Chinese regime's interference with the Divine Performing Arts Chinese Spectacular in Sweden has aroused the Swedish people's awareness of upholding justice, which contributed to their great support of the show. This reaction was probably not what the Chinese regime was hoping for."

“Overseas Chinese: Such a Great Show Should Be Seen by the Whole World (Photo)”