In order to raise awareness about the Chinese Communist Party's (CCP's) persecution of Falun Gong, practitioners in Paris have been exposing the CCP's appalling atrocities, including harvesting organs from living victims. From Parisian practitioners' peaceful and persistent truth-clarification activities on Human Rights Square opposite the Eiffel Tower, people have learned that Falun Gong practitioners follow the principles of "Truthfulness, Compassion, Forbearance." 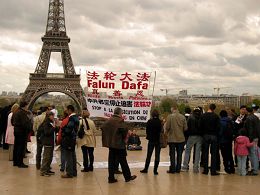 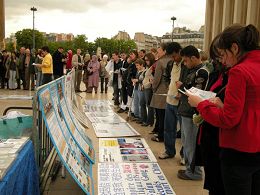 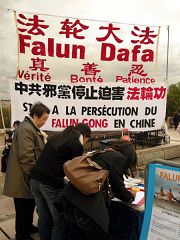 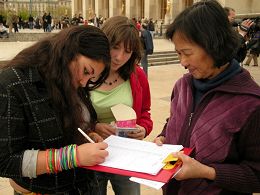 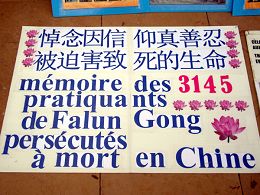 "In memory of the 3,145 Falun Gong practitioners persecuted to death in China" 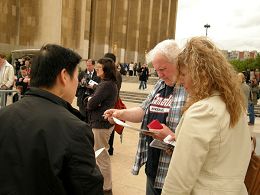 Letting people know the facts of the persecution in China 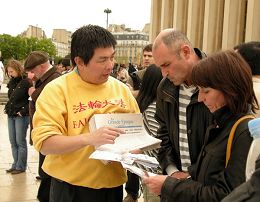 Letting people know the facts of the persecution in China

On Sunday April 20, 2008 on Human Rights Square, Parisians and tourists alike were drawn to the peaceful exercises demonstrated by Falun Gong practitioners. Many were stunned to see the exhibits that exposed the CCP's persecution. One after another, people watched, inquired and signed their names to support Falun Gong by participating in the Millions of Signatures Petition initiated by the Coalition to Investigate the Persecution of Falun Gong in China (CIPFG) to call for an end to the persecution.

After learning about the CCP's organ harvesting, Ms. Lin, who lives in Paris, said, "This is terrible and a crime against humanity. We all know that the CCP regime disrespects and tramples on human rights. As for the CCP's persecution, I have the deepest sympathy for Falun Gong for being persecuted, as it is a peaceful group. But the CCP would not see this. I hope things will improve in the future." 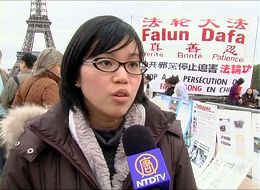 Ms. Lin continued, "I grew up outside of China. A short while ago I visited Shanghai. It was a strange atmosphere of lost freedom. Freedom is completely disregarded in China. Freedom of speech is censored, especially on the Internet. Young people like me are on the net all the time. It felt very strange, very unusual. I hope for changes in the future. I hope China will respect human rights."

Seeing the information posters on the persecution, a tourist by the name of Josie was stunned. She said, "I feel this [Falun Gong] gives me a sense of humanity. I will give them my moral support. This persecution is in my opinion an ugly persecution. Very ugly indeed!" Josie hoped that people would have the courage to face the persecution. "Every Chinese ought to have courage as those Falun Gong practitioners do." 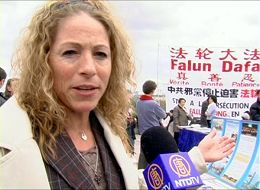 Mr. Michel and his wife Maria regarded the CCP's torture and killing of Falun Gong practitioners as a crime against humanity, which cannot be tolerated. Maria said, "I cannot accept the CCP's persecution. This is against human dignity! Regrettably, we do not have access to much information about what is happening in China. More people should know about the persecution in China. Once they know, the international community will apply certain pressure on the CCP regime." 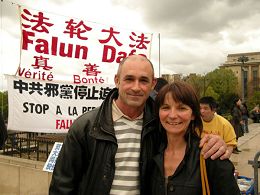 Mr. Michel and his wife Maria called the persecution a crime against humanity

Mr. Michel said, "The persecution in China, like any other persecution, is unusual. Many other countries also do not respect human rights, such as North Korea. For freedom in China, many are taking the opportunity of the Olympics to expose the persecution to the world and fight against the CCP's trampling on human rights."

Mr. Lei Xing, who worked at an information consulting firm, enjoys qigong. He said he wanted to learn Falun Gong. He said, "I know that Falun Gong benefits both mind and body. There are classes at the Jardin du Luxembourg, and I plan to start practicing Falun Gong."

“It's Difficult to Break a Bundle of Chopsticks”