On April 21, 2008, Chiayi County held its 13th and 14th council meetings. Some members of the Coalition to Investigate the Persecution of Falun Gong" (CIPEG) and other volunteers went to the county council meeting and suggested that the legislature pass a resolution to support the Human Rights Torch Relay. They wanted to use this chance to further expose the CCP's human rights abuses, in particular the brutal persecution of Falun Gong over the past 9 years. 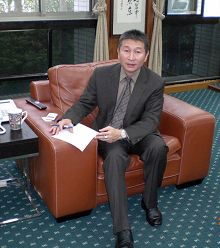 Council Member Yu said, "The CCP tramples human rights, and everyone should bravely step forward to condemn the CCP." He welcomed the Human Rights Torch Relay coming to Chiayi County.

Six other members of the legislature expressed their concerns about Falun Gong's human rights and also expressed interest in the benefits of practicing Falun Gong. Two members of the legislature learned the first set of exercises later in the day. All of the council members signed their names on the "Million Signature Campaign against the Persecution."

In March 2006, the media exposed Sujiatun and 36 other locations in China where the CCP harvested living Falun Gong practitioners' organs, sold them for profit and then cremated the bodies. People in Taiwan from different levels joined the groups condemning the CCP. Among them, Chiayi county was the first to pass a resolution to that effect on May 4, 2006. At present, 18 out of 23 counties have passed a resolution condemning the tragic and inhuman atrocities.

In 2006, over four hundred people from different walks of life formed the Coalition to Investigate the Persecution of Falun Gong (CIPFG), which is divided into four groups (North America, Australia, Asia and Europe). CIPFG was the group that initiated the Human Rights Torch Relay, which set off from Athens, Greece on August 9, 2007. So far it has visited over twenty countries in Europe, Africa, the Middle East, South America, and the United States. It is due to arrive in Taiwan on June 1, 2008 and then travel to other parts of Taiwan for 16 days.

On January 1, 2008, CIPFG started the "Million Signature Campaign against the Persecution." At the conclusion of the activity, they will deliver the signature list to the International Olympic Committee, the UN Human Rights Organization, the International Human Rights Organization, and the government of every country. The CIPFG hopes that the international community will help stop the CCP's persecution towards Falun Gong and secure the release of all imprisoned practitioners.