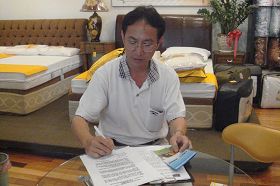 Mr. Ye Chunjin, Director of the Taitung County Public Welfare Association, said that he had seen pictures exposing the atrocities committed by the CCP and condemned it. He signed the petition and offered to be a volunteer in future events.

During the signature drive, some people asked whether such a signature campaign would actually help to stop the CCP's atrocities. One of the volunteers answered, "The reason why the CCP is able to continue its persecution is because many people keep silent. Facing such a brutal regime, some either think it has nothing to do with them, or that there is nothing they can do about it. In fact, everyone has a sense of justice and a conscience. If everyone steps forward to uphold justice, the wicked regime will fall apart."

The CIPFG volunteers were warmly welcomed by the local residents, who encouraged them to keep up the good work and expressed their support for the Human Rights Torch Relay, which is set to arrive in Taitung on June 4.

“"Completely Different from What We Hear in China"”