German Doctor: I Am Very Interested in the Values Displayed in the Show (Photo)

(Clearwisdom.net) On the afternoon of April 19, 2008, Divine Performing Arts presented their second show at the Prince Regent Theater, Munich. Pure traditional Chinese culture had a great impact on the audience. The audience responded warmly and stood up to applaud for a long time at the end of the show to express their affection and respect for Divine Performing Arts and its active promotion of authentic Chinese culture.

The Performance Is So Peaceful and Colorful

Dr. Barbara Reindke came with her daughter, Anne Harstad. Anne works as a marketing salesperson. After they had seen the first half of the Chinese Spectacular, they both said that they liked it very much. The daughter said, "The performances were great, I liked every part of it. It was so peaceful and colorful--I was mesmerized." 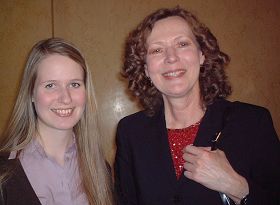 Dr. Barbara Reindke and her daughter, Anne Harstad, both said that they liked the Chinese Spectacular very much

Dr. Reindke said, "Although it is quite difference from our culture, I am very interested in the values displayed in the show, especially about the positive and correct understanding of issues in today's world. It is a significant reference."

She added, " Divine Performing Arts displays things that are happening in China, which pretty much conforms to the reality in society today. Se are deeply moved." Talking about traditional Chinese traditional, she said, "We know your China had a highly developed civilization, but it is a pity those things have been destroyed in modern times, and we are very glad to see that Divine Performing Arts is devoted to restoring traditional Chinese culture."

"I liked every part of the show; it is so peaceful and colorful."

“Munich, Germany: People From All Walks of Live Praise the Chinese Spectacular (Photos)”