Munich, Germany: People From All Walks of Live Praise the Chinese Spectacular (Photos)

(Clearwisdom.net) On April 18, 2008, Divine Performing Arts (DPA) performed in Munich, Germany. In the Prinzregenten Theater, the people of Bavaria were treated to the pure and graceful beauty of Chinese tradition. At the end of the show, the performers answered three curtain calls from an enthusiastic audience.

Munich is one of the major economic and cultural cities in Germany with a long and rich history. Opening night attracted many people from various occupations.

The DPA Helps Me to Think with My Heart

Dr. Anne Guter is a psychologist. She saw a report about the Chinese Spectacular in a newspaper and decided to see it. 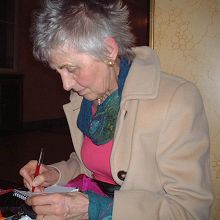 Dr. Guter told the reporter, "The show helped me to switch from my way of thinking to thinking from the heart, something I had not done for a dozen years. The performance entered my heart and blossomed like a flower. It delivered harmony and brought mankind to a new world full of sunshine. The artists performed with their hearts. They showed the power of bringing people from different countries together. The show is true Chinese culture and it belongs to the world."

"The scenes go from the eyes to the heart" 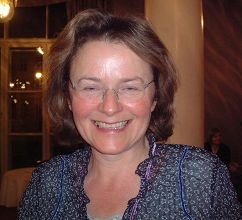 Sofie Voit wanted to understand the Chinese culture that was suppressed by the Chinese Communist Party (CCP) and therefore came to the show. She realized that the scenes in the show were mostly performed by a group of people instead of highlighting a single artist. She said, "The female artists looked like flowers. All the scenes go from the eyes to the heart."

Member of the Free Democratic Party: Outstanding Performance Worth Recommending 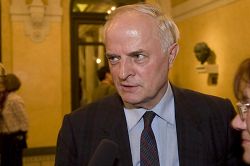 Mr. Lutz Schweicher is a member of the European Free Democratic Party. He listed all his favorite scenes, "The water dance ('Nymphs of the Sea') was very beautiful, 'Water Sleeves,' the Tibetan dance ('Snowy Mountain, White Lotus'), and the 'Mongolian Bowl Dance' were all very interesting. I will call a few friends tomorrow and recommend that they see the show." Mr. Schweicher talked about the attempt of the Chinese Consulate in Munich to interfere with the DPA's show, "The Chinese Consulate shouldn't have done that." He was glad the show was able to perform as planed.

Businesswoman: A show like this should definitely be on stage

Manuela, Magerit, and Hedwig came to the show at a friend's recommendation. They were glad they did, saying "The show is superb! The colors and costumes were beautiful." All of them considered the music in the show to be profoundly meaningful, "It is music that makes people happy." 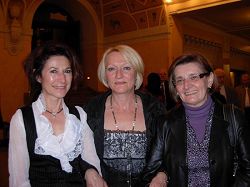 The ladies heard about the CCP threatening the sponsor and trying to stop the show. Magerit said, "A show like this should definitely be on stage." Magerit said that she would recommend the show to her coworkers.

Manuela is a businesswoman and a fan of ballet. She loved how DPA used dance as language to express emotions and things that can't be said with words, "Miraculous. Very impressive and extremely beautiful."

Hedwig is a tailor and she was impressed with the costumes in the show. At the same time, she felt sorry for the peaceful Falun Gong practitioners who are persecuted and cannot freely speak for themselves.

“Munich, Germany: Mayor and Wife, "An Education for the Heart" (Photos)”

“German Doctor: I Am Very Interested in the Values Displayed in the Show (Photo)”