(Clearwisdom.net) Nine years ago, on April 25, 1999, in order to appeal for justice for Falun Gong and its practitioners and to ask for an open cultivation environment, around 10,000 Falun Gong practitioners went to peacefully report and clarify the facts to the government in good faith, and requested the government to stop the unfair treatment of practitioners by those who had ulterior motives. This led to the "April 25" incident. 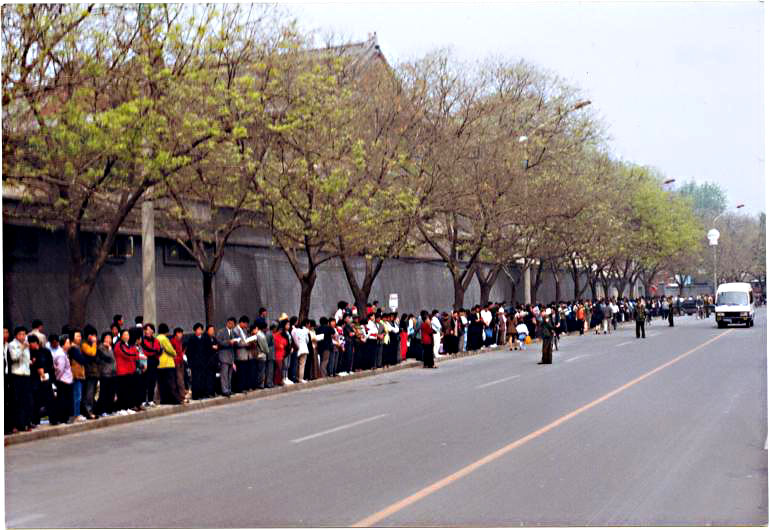 (Clearwisdom.net) In the morning of April 25, 1999, over 10,000 Falun Gong practitioners began to gather in neat order outside the State Appeals Office in Beijing, close to Zhongnanhai, the CCP's central government compound. They sought a return of the open environment to practice Falun Gong that they had enjoyed for years, and more specifically, the release of dozens of practitioners who had recently been arrested in nearby Tianjin City. Tianjin police told them to take their request to the State Appeals Office in Beijing, and this is exactly what they did.

Some Quick Facts about the Peaceful Appeal in Beijing on April 25, 1999

(Clearwisdom.net) Editor's Note: To commemorate the ninth anniversary of the April 25 Appeal, Clearwisdom presents this as one of a series of republished articles from years past. The April 25th Appeal was notable not only for its size, but also because it was remarkably peaceful and orderly. Some 10,000 practitioners gathered in central Beijing that day, peacefully protesting for their civil rights. The CCP propaganda machine, however, in its quest to crush Falun Gong at the bidding of then Party Chairman Jiang Zemin, twisted the facts to serve its own motives. To this day, CCP propaganda accuses Falun Gong of "laying seige to the Zhongnanhai Central Government Compound" on April 25, 1999, falsely alleging that the 10,000 gathered posed a violent threat to the nation and its leaders. Nothing could be further from the truth, of course, as this series of articles documents from various angles.