San Francisco: Many Condemn the Persecution of Falun Gong (Photos)

(Clearwisdom.net) The Human Rights Torch Relay (HRTR) arrived in San Francisco on April 5. Dozens of politicians and human right activists attended the activity and gave speeches. Attendees called upon the Chinese Communist Party (CCP) to stop its crimes against humanity and stop the persecution of Falun Gong. 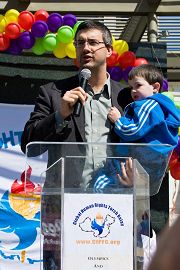 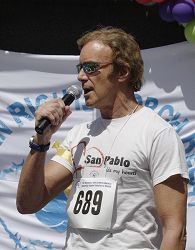 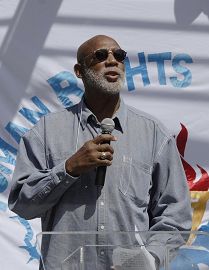 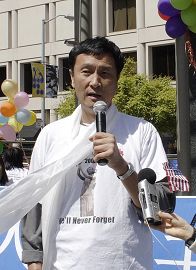 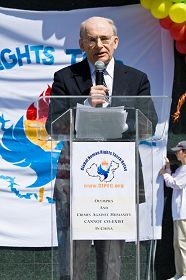 Dozens of media were represented at the event. 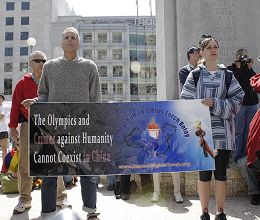 Mr. Daly said the HRTR fits the values of San Francisco--it is everybody's responsibility to protect human rights. Mr. Daly proposed a resolution to support the HRTR and the Tibetan torch relay. The resolution was passed 8 to 3. Mr. Daly pointed out that people will protest the Olympic Torch, when it arrives in San Francisco on April 9.

Ms. Li Bing, a Falun Gong practitioner, shared her own experience of being tortured in China. She was arrested three times and was forced to take unidentified drugs. She was beaten with an electric baton. Due to the torture, she lost her memory for two years after being released from the jail.

Ms. Li said when she was released from the labor camp, there were still more than 1000 practitioners jailed there. Practitioners were cursed, beaten, force-fed, tortured, confined in solitary cells, and forced to do hard labor.

Mr. Paul Morris, city council member from San Pablo, commented on the brutality of the persecution. He said that Falun Gong practitioners are peaceful, but the CCP ignores their human rights. He pointed out that the American government should exert more pressure on the CCP both politically and economically.

Mr. David Matas, a famous Canadian human rights lawyer and co-author of Report into Allegations of Organ Harvesting of Falun Gong Practitioners in China, spoke at the rally. He pointed out that thousands of Falun Gong practitioners were jailed in China. They are tortured if they don't give up their beliefs. The investigation undertaken by Mr. Matas and Mr. David Kilgour has concluded that the CCP has harvested organs from thousands of practitioners for profit.

Mr. Chen Kai, a former basketball player on China's national team, attended the HRTR as a runner. He said that he was glad to attend this activity and that he would attend every activity that exposes the brutality of the CCP. He said that the human rights situation in China would not improve as long as the CCP still governs the country. Mr. Chen praised Falun Gong practitioners for not giving in. He encouraged practitioners to keep fighting for their rights.

John Carlos, a famous track and field athlete and the bronze medal winner in the 200 meters at the 1968 Summer Olympics, said that the persecution of Falun Gong is completely wrong. He said he came to this event to help Chinese people let their voices be heard.

Mr. Carlos said he knew about the persecution of Falun Gong and he wanted to let more people know about it. He said this kind of event should be held everywhere in the world so that more people will know about this most brutal crime against humanity.

Mr. Carlos said people must know about this so that they will make correct decisions. "It is not an issue of racism or economy. It is an issue of human rights." He said the persecution must stop, because it is completely wrong.