The Divine Performing Arts company concluded its presentations of the Chinese Spectacular on March 5 in Kaohsing, Taiwan, to audience members' warm applause. Before the show, Kaohsing Mayor Chen Chu brought a special congratulatory message and a flower basket to congratulate Divine Performing Arts on their success. Musicians, dancers, artists, and writers thought that the show was superb and commended the performance as "splendid, stunning, and touching." 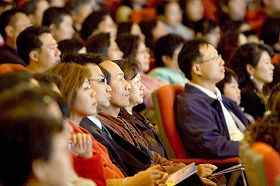 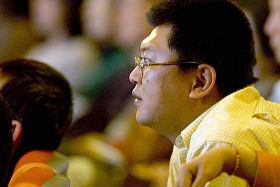 Completely enthralled by the Chinese Spectacular 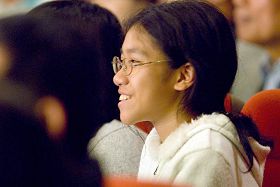 A young spectator enjoys the Spectacular

Huang Shu-chuan, supervisor of Guanyin Mountain International Art Exchange Association, Kaohsing County, is a renowned Chinese painter. After seeing the Spectacular, she said it touched her inner heart and was, "Supreme." She said it was hard to describe just how moved she was.

The Art Exchange Association is involved in many art and cultural events. Ms. Huang has seen many performances, but she said she had never seen a performance as splendid as the Chinese Spectacular.

"Dances like 'Descent of the Celestial Kings,' 'Nymphs of the Sea,' and 'Water Sleeves' are rarely seen. They are really outstanding; it defies human language to describe them."

She said she was most impressed with tenor Hong Ming's song, "Rest in Knowing." It captured her attention so completely that she had no other thoughts during his performance.

Wei Kuo-tai, Director of the Henan Opera of Taiwan Kuoguang Performing Company, said after the first half of the show, "Fantastic, truly splendid! Their artistic skills are wonderful. I was really moved! We rarely see such large scale performances in Taiwan. They are very dedicated to their performance and emitted truth, kindness, and grace. I am really touched!" 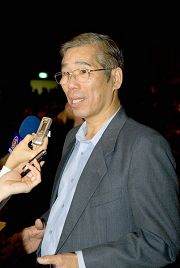 He was impressed with the combination of dancing and Chinese drama and thought that this artistic feast would inspire audiences. He said the performers were exceptional in how well they danced with the accompanying music.

In 1979, Mr. Wei joined the army and held important posts in the Flying Horse Henan Opera Performing Company. In 1996, he led the performing company and performed in Europe and America.

Kang Ching-wen, army commander and member of the Huangkuohsing Branch of the Kuomintang, said the show reminded him of his hometown in Shandong Province. In his eyes, it was the best show he had ever seen since 1949, when he followed the government to Taiwan. 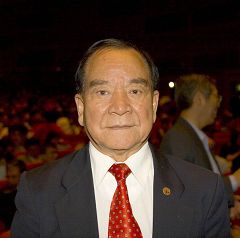 Kang Ching-wen, army commander who participated in the war against Japan in World War II, was impressed with the backdrops

He said, "My hometown is in Shandong. The scenery in backdrops seemed to be from my hometown. There were farms, mountains, and brooks, just like a Chinese painting. I really enjoyed it. 'The Loyalty of Yue Fei' and 'Lady of the Moon' are Chinese traditional stories. Current performances in Taiwan rarely portray such stories. The Divine Performing Arts created many memorable pictures." 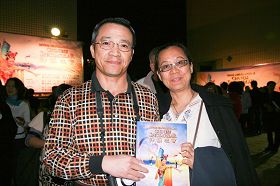 Chu Hsiao-chi, a chief officer in the army, and his wife

Mr. Chu indicated that the colors implied kindness and the essence of Chinese culture. Each performance in the show touched him. "'The Loyalty of Yue Fei,' 'Lady of the Moon,' and the songs awaken people's kindness."

The show supplied answers for his long-sought questions. He hopes that the show will continue and will come again next year. 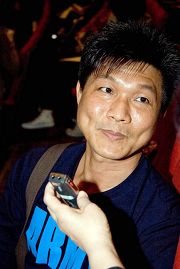 He thought that the portrayal of current true-to-life stories should be respected, "The persecution of Falun Gong in China--and not only Falun Gong, personal relations, and personal views are topics often avoided. There should be less violence [in society]. I think it is important that there be an exchange of ideas and respect between people."

Chang Yun-tong, Director of Guanyin Mountain International Art Exchange Association, said that the power and grace of the performance was as refreshing as a spring breeze. 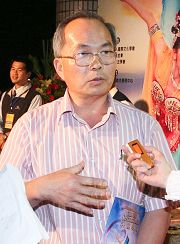 Director of the Woman's Consulting Board Executive Council: The female Performers of the Chinese Spectacular are majestic women

Cheng Ru-yi, Director of the Woman Consulting Board Executive Council, said after the show, "Very successful. It is worth being spread widely. The female performers on stage are majestic women. They perform with body language. It is very beautiful." 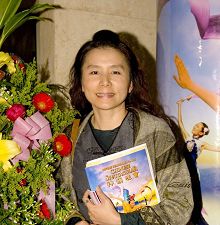 Cheng Ru-yi, Director of Woman Consulting Board in Executive Council

She said, "All the performers expressed truth from bottom of their heart. In life, what are truth, compassion, and tolerance? It makes us think. Especially the dance, 'The Power of Awareness;' it described the persecution of Falun Gong in China. Though I am not a Falun Gong practitioner, I had the same feeling."

Hsieh Wen-Chi, an actress with the Kuoguang Henan Opera Performing Company, indicated that the coordination between the performers, backdrops, and music was very precise. She said, "We traditional drama players do not have many dancing gestures. We need to learn from Divine Performing Arts." 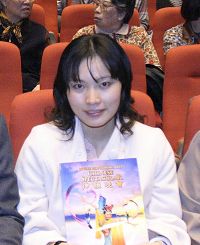 She said, "From the performance 'The Risen Lotus Flower,' I felt the purpose of the program was to lead people to kindness. The lady practitioner was beaten to death by the police for safeguarding her own belief. I felt sad but was moved after seeing she succeeded in cultivation to reach consummation."