Film and Television Music Composer: "I wanted to dance along." (Photo)

(Clearwisdom.net) The Divine Performing Arts Chinese Spectacular, which has dazzled Taipei's arts community, presented its final show on March 18, 2008, and continued to attract public figures from the arts and literacy circles. Attending the show with his wife was senior film and television music composer Mr. Chiang Yi-fan, winner of the 20th Golden Peak Award in music composition and member of the judges panel for the 13th Golden Melody Awards.

After the show, Mr. Chiang expressed his praise for the Divine Performing Arts of New York, for bringing traditional Chinese culture to Chinese people of today, to be directly received and experienced, without giving the perception that traditional culture is old and outdated. 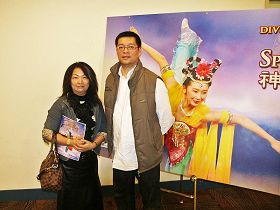 Mr. Chiang Yi-fan and his wife joined in the experience of the Divine Performing Arts Chinese Spectacular

Admiration for the Performers' Movements and Agility

After the first half, Mr. Chiang said he felt that the programs were classical. He said this was the first time he had seen such pure dance and performance that truly expressed the essence of China, and it touched his heart deeply. He felt the performers' movements and agility directly moved his heart, and was unprecedented.

The second half of the show encompassed ethnic cultural content. Mr. Chiang said, "Ladies of the Manchu Court" was well performed, and he particularly praised the piece, "The Fruits of Goodness." He said that the backdrop, design, and the entire show was very creative and truly enjoyable. Furthermore, even though the music was blended with western instruments, it presented a Chinese style as a whole.

Values Communicated in the Show were Easy to Comprehend

Mr. Chiang said the show was really produced from the angle of China, which allowed modern Chinese people to completely and directly experience traditional Chinese culture. It was presented in a fashion that did not create the perception that traditional values are old and outdated. He said that the Divine Performing Arts show was very traditional and classical in its entirety, but from our modern point of view, for reasons unknown, it could be accepted directly.

"I want to dance along"

Mr. Chiang Yifan continuously emphasized that he felt greatly satisfied to be able to witness such a beautiful Chinese dance performance. He felt the performers expressed many things through their movements, and that all the performers were well coordinated and balanced. Furthermore, he said that because people exist between heaven and earth, one could be completely submerged in the experience while watching the performances. Mrs. Chiange said it was an incredible experience, and there was something inside him which wanted to dance along.

Mrs. Chiang also said it was the first time she had seen such a pure Chinese traditional dance performance. She felt it was a great visual experience, and was deeply touched by the messages conveyed through the show.