On March 16, 2008, Divine Performing Arts gave its fourth performance of the Chinese Spectacular in Taipei. Many well-known people from the literature and art circle came to watch the performance because of its spreading fame. Beijing Opera authority, head of the Beijing Opera troupe of Taiwan Drama Junior College, Cao Fusheng was among them. He had high praise for the performance. He believes that the show preserves Chinese classical culture, reveals the most upright human values, and had a stabilizing effect on all people.

In an interview after the show, Mr. Cao told a reporter, "In the first half of the performance, I saw the progression of culture. It conveyed the message of how modern people can walk out of distress. While in the second half, the Spectacular presented the vigor of life that makes you feel energetic and makes you realize that society needs to be educated and have a sound sense of the best of human nature to exist." 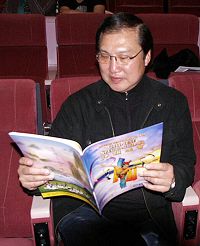 Cao Yongfu was visibly moved when he said, "The first piece, 'Descent of the Celestial Kings,' awakened some sensitive feelings within me. It is hard to describe what it is. I feel that my heart is connected with it and it seems that I knew it before."

He said that when watching the dance, "The Power of Awareness," he experienced an ineffable feeling. He feels that this is what modern people should pay attention to. That is how one should face the "real world." When we experience and realize the "truth" of modern society, we should bravely stand up and face the problems instead of retreating. Mr. Cao believed that those who watched today's performance would be awakened. He said that the whole process [of experiencing the Spectacular] is the process of awakening and being called upon.

Finding Direction Out of Confusion

Cao Fusheng continued, "The whole performance is a combination of tradition, mixed with aspects of the modern age. The dance 'The Fruits of Goodness,' combined with the dynamic backdrops, looked particularly nice. Just like the young people in the dance, they indulge in [modern society] but they still have a little kindness; a cap, a jacket, an action, and a motion can be accepted by gods. Gods will reclaim and remind you. When you get the Buddha book, you may know how to adjust yourself. As modern people have been lost somehow, the performance gives you a definite message regarding how to find your direction."

Their Basic Technique is Quite Good

Cao Yongfu said in admiration, "Their basic technique is quite good. I myself got it from the Beijing Opera and I was trained about these things before. Their technique is very solid, very suitable and looked very comfortable. This is real evidence of their pursuit of perfection. They are carrying on, making progress, presenting the vigor, youth, and the power of life. That's great."

He continued, "The vocalist Hong Ming sings very well. I just told my friend that you cannot find a voice like his in Taiwan. That's great and I feel very satisfied. I also enjoyed the Erhu greatly. She played wonderfully. The composition, the charm, the sound lets you feel many inner meanings. That's marvelous."

Cao Fusheng continued with his praise of the Spectacular. "'Chopstick Zest' is a piece I have never seen before. All the dancers are young male dancers. It is rare to see so many male dancers. They danced in such an orderly way, with so much vigor and verve. It is tremendous. I hope that the performance will have an impact on advancing social morals. Whenever you see the performance, you will be moved."

“Montreal, Canada: Rally Held to Call Attention to the Large-Scale Arrests of Falun Gong Practitioners in "Preparation" for the Olympics (Photos)”

“German Parliamentarian: "This show can help people distinguish between good and evil." (Photos)”