(Clearwisdom.net) After presenting 29 performance of the Chinese Spectacular in nine European countries including Germany, France and the U.K., the Divine Performing Arts Company (DPA) gave its first show in Stockholm, Sweden on March 20. The audience included people from all walks of life. They expressed their appreciation of DPA's professional performance. At the same time, many also expressed their indignation at the Chinese Communist Party's interference with the show and its persecution of Falun Gong practitioners.

Before his retirement, Mr. Goren Sjostedt, who lives in northern Sweden, was a general manager of ABB, a well-known global company. Currently, he still serves on the board of directors of the company. 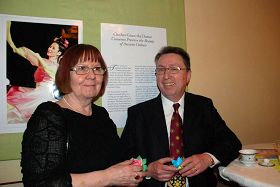 Goren Sjostedt and his wife

Last year Mr. and Mrs. Sjostedt had the opportunity to watch the Divine Performing Arts Chinese Spectacular in Berlin. They enjoyed it so much that they drove four hours from their home to Stockholm to enjoy the first show in Sweden this year. After the show they were pleased to be interviewed, to share their impressions of the performance.

Mr. Sjostedt liked the solo vocal performances the most. He said, "The lyrics of all the songs can be read on the digital background, which is really impressive. They lyrics also convey very beautiful messages regarding the relationship between the wisdom of life and principles of nature."

Mrs. Sjostedt commented, "The programs are very well done, warm and joyful. When you listen to the music, it's all very good messages. We can understand the messages delivered in the show. I like the dance program 'Water Sleeves.' I also like the little girl in 'The Power of Awareness.' The numbers with drums are also among my favorites."

She also said, "I liked 'The Power of Awaress' and its messages. I have heard about Falun Gong before."

Mr. Jan Astrom is the owner of the advertising company BOXEN MEDIA in Stockholm. On March 20, he and his wife Marana Makela came to see the first DPA show in Stockholm. 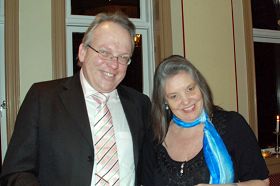 Mr. Jan Astrom felt it was great that the hosts of the show gave a brief introduction to each performance before it began. This way, the audience was able to appreciate the inner meaning of each number.

His wife Ms. Makela is an interior designer who has a special appreciation of color. She said, "The color and costumes are fabulous. The coordination of combinations of colors are great. This is a truly magnificent performance. Both of us enjoyed it very much."

When asked what impressed him most about the Spectacular, Mr. Astrom said, "The beautiful color. My wife has a professional eye for color. As she said, the combination of color is wonderful and bright. I also liked 'The Mongolian Bowl Dance' and 'Snowy Mountain White Lotus'."

Ms. Makela smiled at her husband's comment, "I'm surprised. I haven't discussed the show with my husband yet. But I feel the same way. I also enjoyed 'The Mongolian Bowl Dance' and 'Snowy Mountain White Lotus'. The color is very special."

Mr. Astrom continued, saying that he was very sad to learn of the attempts by the Chinese government to block DPA performances. He considered DPA to be an exemplar of a very beautiful culture that must be preserved. He couldn't understand why the Chinese Communist Party would interfere with DPA.

Ms. Makela agreed with her husband, "We can't understand this. Nor can we believe this." She said it would not be allowed in Sweden to treat its own citizens the way people are treated in Communist China.

Mr. Astrom said, "In Europe we have several hundred years of history, which we all feel very proud of. However, the Chinese government wants to remove its traditional culture from the world. This is really unbelievable."

When asked if they would be interested in seeing the show again if DPA comes to visit Sweden next year, they smiled, "Absolutely. We will come watch it again next year." 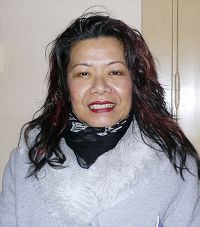 Accountant Anita Lofblom felt that Divine Performing Arts is not only relevant to herself, but also to the whole society. She especially mentioned the message "Truth-Compassion-Tolerance" conveyed by the show. She thought that was a very wonderful message.

Ms. Lofblom enjoyed the drum performance the most because it delivered a sense of courage and tremendous energy.

Anita's paternal grandparents are all Chinese. After seeing the dance, "The Risen Lotus Flower" and "The Power of Awareness," she was worried for the performers. She feared that they might encounter trouble when they go back to China. Later, when she learned that all the performers live outside of China, she expressed relief.

Ms. Lofblom said, "When I leave the theater, I will take away many positive things. I have more tolerance and I will not lose courage. I will persist when faced with pressure and tribulations. I believe these messages also apply to Chinese people."

Divine Performing Arts will present four more shows of the Chinese Spectacular in Sweden. It is expected that nearly 10,000 Swedish people will be able to enjoy the authentic traditional Chinese culture brought by DPA.