Dr. Reinhard Selten, 1994 Nobel Laureate in Economics, was invited to speak at the College of Commerce at National Chengchi University. During his stay in Taipei, despite his tight schedule, he and his wife attended the third show of the Chinese Spectacular by the Divine Performing Arts at the Taipei International Convention Center on March 6, 2008, to enjoy the beauty of the Chinese culture. 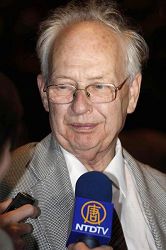 Dr. Reinhard Selton is an outstanding German-born economist, and a professor of Economics at the University of Bonn in Germany. After seeing the show, he had high praise for it, saying that it was, "A very impressive and enchanting performance." He hoped to tell everyone that the Divine Performing Arts Chinese Spectacular is an excellent, world-class show.

The Music Is Moving

Dr. Selton said, "The whole style is very interesting. The background images were beautiful and they sometimes also had movement, which I found surprising. The dancing and the music were very impressive. The music [I liked] the most, I mean it is traditional Chinese, which I like very much."

He continued, "I have never seen anything like this before in other countries, including the opera I saw while in Beijing. It did not have such a grand scale, and mostly what I saw [in Beijing] were acrobatics, which did not contain anything impressive. I found the music in the Spectacular moving."

I Was Deeply Enchanted by the Divine Performing Arts

Dr. Shelton also liked the show's arrangement, comprised of, "...many short pieces in succession... I liked this very much. I usually don't much appreciate dancing, but [in this show] it's very good."

He also believes that Chinese and western cultures are not completely different, "Because in ancient times, Chinese civilization was very rich, and China was strong, so many things from Chinese culture were passed to Europe, and influenced European culture. Therefore, those Chinese style paintings are actually not at all strange for us."

A Very Ancient and Historical Feeling

Finally, Dr. Selton told the reporter, "I do not have any religious beliefs, but when I saw the images of Buddhas, Taos and Gods on the stage, I was really fascinated. It gives you a very ancient and historical feeling."

Professor Selten and two colleagues won the Nobel Prize in 1994 for their analyses of equilibria in the theory of non-cooperative games. Dr. Selten currently runs the Laboratory for Experimental Economics at the University of Bonn.