Finland: Chinese Student Calls on the CCP to Release her Parents (Photo)

(Clearwisdom.net) On March 4th, 2008, a Chinese student in Finland appealed at the Chinese Embassy and called on the Chinese Communist regime to release her parents, who were kidnapped by the authorities because they practised Falun Gong. She also protested the Chinese regime's escalation of the persecution of Falun Gong in the run-up to the Olympic Games. 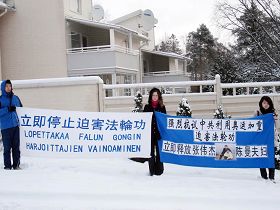 Student Sunny Xu appealed at the Chinese Embassy to Finland for the release of her parents Zhang Weijie and Chen Man.

Sunny Xu is an international student at the Haaga-Helia University in Finland. During the past two years since she left China for her further studies in Finland, her mother has been illegally imprisoned twice and her father was illegally sent to a forced labour camp for re-education for one year.

As the 2008 Olympic Games will be hosted by China, recently the regime has stepped up efforts to arrest many civil right defenders, lawyers and Falun Gong practitioners.

In the petition, Sunny said, "The Olympic Games is not supposed to be an excuse or reason to proceed with the cruel persecution. My parents didn't do anything wrong and the regime has no reason to illegally arrest or sentence them."

"I demand my parents be released immediately, and strongly protest against the Chinese Communist regime's escalation of the persecution against Falun Gong. In the meantime, I also call on the people with conscience to help rescue my parents."

"Studying overseas, I constantly miss my parents who have been jailed for a long time and subjected to persecution. Moreover, I am worried about the situation of my elderly and diseased mother-in-law." "Curricular pressure, mental sufferings and an economic crunch have contributed a tremendous impact on me."

On February 11th, 2008 which was the fifth day after the Lunar New Year, over ten Chinese police officers broke into a winter camp at Wuhan City to arrest a teacher and over ten students and their parents. As a teacher, Sunny's mother Chen Man often told her students how to be a decent person according to the principles of Truthfulness, Compassion and Tolerance. Unfortunately, he was illegally arrested by the Chinese police."

Sunny said: "The police arrested my mom without giving any notice to my family members. I didn't know about her arrest until the Minghui Net carried this news. My grandmother intended to pick her up after the 15th day of her detainment, but my grandma was informed that my mom had been transferred to another place. The police declined to disclose the place where my mom was detained; therefore, her whereabouts remain a mystery to date."

She added that her parents were tracked, wire tapped, illegally imprisoned and confined in a forced labour camp since 1999 simply because they practiced Falun Gong. The entire family has been under tremendous pressure and sufferings since the persecution began.

Chen Man was illegally imprisoned for three months after she tried to seek rescue for her husband Zhang Weijie, who was abducted to a brain washing centre in June 6th, 2007.

Sunny said: "My mom has been severely tortured both physically and mentally. She was arrested again three months after being released. My father was illegally confined in a labour camp under torture for a one-year re-education, leaving my diseased grandmother unattended at home."

In the open letter, Sunny called on the Chinese officials at the Embassy: "Since you are working oversea, a lot of information is easily accessible to you. After realising the intrinsic evil nature of the Chinese Communist Party (CCP), you should stop helping the evil to perpetrate evil deeds and separate yourself from the CCP. As heaven is eliminating the CCP, it is high time you chose a bright future for yourself and your family."

According to incomplete statistics disclosed through non-governmental channels, there are 3,137 documented deaths of Falun Gong practitioners from persecution in the period from July 20th, 1999 to mid-2008. These documented deaths have occurred in over thirty provinces, directly under the Central Government and autonomous regions across China. The provinces with the most death cases are: Heilongjiang, Hebei, Liaoning, Jilin, Shandon, Sichuan and Hubei.

In the course of carrying out state terrorism, numerous Falun Gong practitioners have been killed, wounded, separated from their families, or forced to leave home with no fixed abode and wander about. Hundreds of millions of their family members, relatives, friends and colleagues are affected and brainwashed to a certain degree respectively.