Scottish Musician in Taiwan: I Want to Sing Songs from the Spectacular (Part 2) (Photo)

(Clearwisdom.net) On the evening of March 7, popular British musician Robin Dale, also called the "Robin Hood of Music," who resides in Taiwan, watched the Chinese Spectacular for a second time in Kaohsiung City, Taiwan. He wanted to gain an in-depth understanding of the performance. He shared with us that he was pleased to find many of his dreams coming true because of the Chinese Spectacular performance. He experienced the joy of returning home. 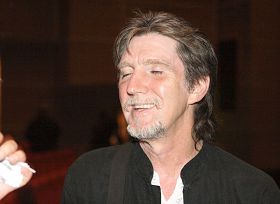 Finding My Dreams in the Performance

During the interview, Mr. Dale said: "Many dreams are hidden in the depths of my soul, one of which is to make this world better and people happier. I have worked actively on the realization of these dreams. For this, I write music and songs that speak to the world's people, asking them to put aside their differences. I compose music, lyrics, organize concerts and train bands, hoping that they will bring my songs and realm to more people.

Many people suggest that my hopes are mere daydreams and will never come true. I learned from my father and grandfather, both of whom helped others regain health for free throughout their life, that I must follow my dream. Therefore, I have never given up hoping and wishing. I have been working on the realization of my dreams for many years without finding others who strive forward in the hope to make a difference in this world. I have waited for so many years until I met the Divine Performing Arts Company. I am delighted that many people also have similar dreams than I and we are moving the same direction! I truly saw many of my dreams represented in the Chinese Spectacular performance.

He said that during the Chinese Spectacular performance he saw on the backdrop green mountains, clear lakes, fragrant flowers, beautiful poplars and willows. The men represented masculinity and the women femininity. I saw love, an open-minded mother, a son's show of loyalty and filial piety. At the same time the scenes portrayed righteousness, care and benevolence. I saw people stand up against injustice. My mind experienced an exploration of the truth of life, faith and loyalty to belief, enlightenment and guidance from Heaven. While listening to the voice from Heaven, watching the graceful dances, enjoying the beautiful sceneries, I felt for the first time complete fulfillment. I was 100 percent satisfied!

These young actors and actresses are really very, very charming! One sees a crystal clear heart. Then, I saw on each face an innocent, happy smile, although they were constantly rushing to get ready for the next scene. This performance is really special! Very special! What I saw influenced me deeply and gave me a temporary relief from my earthly troubles. I returned to my spiritual home, and regained peace of mind and happiness.

The Chinese Spectacular performance imparts the criterion for judgment, "Truthfulness, Compassion and Forbearance." The performance teaches people to be considerate of others, and not to do harm to others. It tells us that we should help others. The show teaches people to exercise restraint and be tolerant. It teaches people to be truthful and never deceive others. I understand that I need to improve first. Anyone can only find true happiness if he/she becomes a good person. And the most beneficial of it all is that after one has improved, one will help and influence the people in one's surroundings. One's happiness will change others. In fact, as long any one of us behaves well, strives to do better, this world will change for the better!

There was one scene, the "Descent of the Celestial Kings." which has a message that Heaven wants us to hear. Those who are willing to watch will receive the message. Those, who are willing to improve will see what I have seen. Some people say that they do not believe in anything. Well, it doesn't matter if you believe or not. What is most important is that you must choose if you want to be a good person or not.

In fact, people most likely know what is good and what is bad. If you are unsure, you will encounter someone or something that gives you the opportunity to see what is very good and what is really bad, but everyone has to choose their own path. If anyone is reluctant to step onto the good path, he/she will be down on his/her luck. Bad people are unlucky not because of the good people, but because they don't want to be good. The individual chooses his/her path.

When can this dream become reality? When young, we want to grow up quickly. There is no such thing! We have to grow up day after day! Many of us have had a vague feeling that it seems almost the time for something to appear or something to happen. After watching the Divine Performing Arts, I think that God has given the signal that the time is approaching and let us be prepared for it!

The Playing of Erhu Takes Me Into One of My Dreams

I am a guitar performer and have friends who are Erhu masters. So I'm fond of the Erhu. I think that the Erhu has a unique Oriental charm. But I know it is very difficult to be an expert Erhu player. An Erhu player needs good hand skills, and also has to put his mind and heart into it to play wonderful and moving music.

I heard the Erhu being played. I know the lady is very skillful and excels at it. What's more, she put her feelings and experiences into the music and played with her soul and heart. So her playing is very, very appealing. She played directly to my heart and brought me to one of my dreams.

Robin Dale, in his late 50s, is a native of Scotland. He came to Taiwan with his father in his youth. His father was a medical doctor and helped many Taiwanese. He grew up speaking fluent Chinese and ran a business that covered Hong Kong, China, and Taiwan. In the 70s, he worked closely with Zhao Ziyang and communicated with western countries on behalf of Beijing. After the June 4, 1989 Tiananmen Massacre, he became an "undesirable" for China and lost his business connections, because he made music CDs protesting the suppression of the students by Beijing. He later settled in Ping-tung County, Taiwan, and became a musician. He continues to make his music and songs to spread his message of love and peace.