(Clearwisdom.net) On March 10, the Divine Performing Arts debuted at Prague Congress Centre. The touring arts company held three shows of the Chinese Spectacular in two days. The audience warmly welcomed the show, giving a long round of applause for the first program, "Descent of the Celestial Kings." 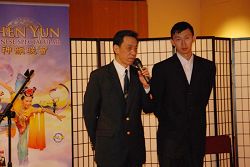 Mr. Guan Guimin, a famous Tenor and the vice chair of Divine Performing Arts, gives a speech at the reception for the show.

After the performance, the arts company held a reception. Senator Liska, the vice president of the Czech Senate, attended and spoke with Mr. Guan Guimin, vice chair of the arts company.

Senator Jiri Liska, vice president of the Czech Senate: "The Show Was Excellent!" 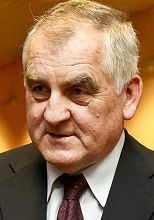 Senator Jiri Liska: "Although the Eastern and Western cultures are very different, they have similar values."

Senator Jiri Liska came to the show with his wife. He highly praised it and said he hoped the arts company would hold more shows in Prague in the future. He said: "The show was excellent! I liked the drum dances, which demonstrated great power. Everything in the show was great."

Noting the common ground of different cultures, Senator Liska said, "What impressed me and surprised me was that although the Eastern and Western cultures are very different, they have similar values. Our basic pursuits and wishes are the same. We all want to have peaceful and happy lives."

Senator Liska didn't know very much about the persecution of Falun Gong before. However, he said, "After seeing this show, I feel that as a senator I should learn more about it. China is a big country. The Chinese government should recognize their problems and work to improve." Mr. Liska said he hoped that he would have chances to see the Divine Performing Arts' shows again in the future.

Senator Liska's wife also enjoyed the show. She said, "The show was so beautiful. I have never seen such a wonderful show before. I liked all the performances, especially the dances."

Congressman Jiry Polansky: The show was wonderful and unique 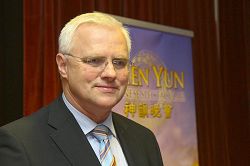 Jiri Polansky, a Czech congressman and a lawyer, attended the show with a friend. He said that he liked all the programs and that he had never seen such a beautiful show before. The show was very unique to him. He liked the drum dances and "Water Sleeves" dance.

Congressman Polansky said that he would recommend the show to his friends, because people in Czech don't have many chances to see such a show.

The Prague Congress Centre, where the shows are being held, was built in 2000. This is the first time that a Chinese cultural show has been held there.