Mr. Tang Boqiao, a well-known Chinese democracy activist, is a fan of the Chinese New Year Splendor. Although he has seen NTDTV presentations several times, he was still amazed by the presentation at Radio City Music Hall on February 3. He said that the show embodied beauty and passed on a message that will benefit the world. 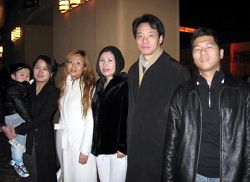 Mr. Tang Boqiao (second from right) came to the show with his friends

Mr. Tang said, "The two and a half hour show demonstrated all kinds of beauty and displayed the spirit of Chinese culture, as well as the beauty of high moral standards. The show is at a very high level, which is not just due to the performers' professional skills. When art reaches a certain level, it's a reflection of the actors' character and bearing."

Mr. Tang said that the show was so great because of the performers' state of being, and it surpassed anything he has seen from other shows. Mr. Tang believes that the arts were created and given to humans by heaven, along with artists' talents. So if they can communicate with divine beings, they will be able to reach a high level. He said, "When I was listening to the Erhu today, I had a very strong feeling of this phenomenon. The Erhu is well-suited for expressing sorrow, and the famous 'Er Quan Ying Yue' is seen historically as the epitome of that. But I think Qi Xiaochun's Erhu solo tonight surpassed even that."

He continued, "'Er Quan Ying Yue' expresses the sadness and the suffering of human life. In 'Er Quan Ying Yue,' people are helpless and without hope, but in Qi Xiaochun's Erhu solo, we sense a courageous spirit, with which one can overcome the difficulties. Especially at the end of the piece, we can clearly discern the message of compassion and benevolence, which touches people's hearts and encourages us."

Mr. Tang said that his favorite part of the performance was "The Power of Awareness." He said, "I could not hold back my tears when I saw people standing up to support the Falun Gong practitioners. I saw the power of awareness, and in front of this power, the evil is nothing."

“New York: "It's a Once-in-a-Lifetime Experience"”

“Russian Family: We Will Forever Remember This Show”