On June 27, 2006, when I took a train in Jiamusi City to return to Shuangcheng City, railway police officers arrested me at a security checkpoint because they found a Dafa book and five Dafa articles in my possession. I was sent to the Jiamusi Railway Detention Center and held for one month. Then I was sentenced to one and a half years of forced labor on July 27, 2006 and immediately sent to the Jiamusi Forced Labor Camp. On October 10, 2006, I was transferred to the Heilongjiang Province "Reform" Base, actually the Suihua Forced Labor Camp. I was released on November 9, 2007. 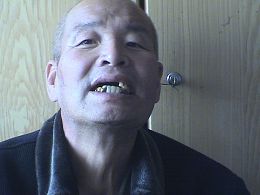 Photo 1: Losing two front teeth due to guards tying strips of cloth around my mouth 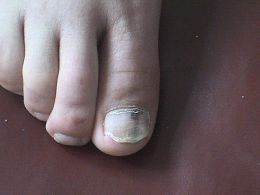 The Chinese Communist Party (CCP) always deceives people with lies, such as "humane management is implemented in prisons; there is no beating and scolding, and no persecution of Falun Gong practitioners takes place in detention." Here I will expose what I have suffered during the forced labor period and expose the evil actions behind the so-called "humane management."

I kept clarifying the truth at the labor camp. During breakfast on the morning of November 20, 2006, I called out, "Guards and staff members, please do not be fooled. Falun Dafa is the righteous Fa. There are practitioners in over 80 countries worldwide. Thousands practice freely in Taiwan and Hong Kong. Falun Dafa is good!"

The guards set upon me. I was immediately kicked and punched, and later beaten again in the division office. When they tried to hang me onto the upper railing of a bunk bed in the cell, I struggled not to cooperate with them. Team leader Diao Xuesong viciously kicked my lower abdomen so fiercely that I immediately fell to the floor, bathed in sweat. I don't know how long it was before I finally recovered. They hung me between two beds. Later on, Diao Xuesong fabricated a claim that I attempted to practice the Falun Gong exercises and then sent me to a solitary confinement cell for seven days.

The solitary confinement was a room less than four-square-meters, with a metal chair in the middle. There was a three-inch metal board under the chair. The room was gloomy. I was forced to sit in the chair, handcuffed and shackled. A belt across my chest prevented any movement or let me lower my head. A tape player with auto rewind and replay function ran twenty-four hours a day. They inserted earphones into my ears. I was forced to listen to the tape non-stop. The brainwashing content was played extremely loud. After several attempts I finally removed one of the earphones. When the guards discovered this, they taped both of my hands tightly, causing my hands to swell severely. They also tied my upper chest with the cloth strips so tight that I was unable to move. My feet were badly swollen. Two days later, my hands and feet started bleeding. The abusers still tied my hands tightly. The metal chair was very cold to sit on, and my hands tied onto the chair arms were numb and cold. I felt extreme pain and discomfort. Three days later, since I still refused to yield, guards incited the assigned monitors (prisoners Chen XX and Guan Changfu) to torture me. They dumped a bag of hair cut from others into my underclothes against my skin and then put a special heavy cotton hat over my head. It covered my eyes. It was so hot that I started to sweat. The hair made me itch unbearably. I wanted to scratch or rub, but was unable to move my hands, my feet or my chest.

During the time for the restroom break on the second day in the solitary confinement cell, the monitors said they didn't have the key to release me from the chair but they could bring a spittoon for me to urinate in. I felt a little embarrassed and said I didn't need to go to the restroom. However, they started to unbutton my pants. They pulled my genitals out and rubbed something on it. They didn't let me urinate, but just buttoned my pants and left. About ten minutes later I felt excruciating pain in my genitals and I almost lost consciousness. I spent the whole night in painful spasms. Next day they continued to do the same thing. Then I saw clearly what they put on my genitalia. It was tobacco powder that was used in a long-stemmed Chinese pipe.

When the seven-day term ended I still didn't yield to them. Division deputy Liu Wei said it was time to treat me with fiber-glass. The fiber-glass is used for the outside covering of electric wires and also used to make asbestos tile or sheets. That night, monitor Song Xiaojun stuffed a bag of fiberglass all over my body. My hands, feet and chest were tied. I couldn't sit down; if I did, I felt like I was sitting on a needle cushion. I felt extreme pain and itching, which was so unbearable that even death seemed to be the lesser of two evils.

I was weak and skeleton-like from a hunger strike. I was given medicine and milk powder to recover faster. However, it was a scheme. On July 24, 2007, when my health had just improved a little bit, they couldn't wait any more and tortured me again. Section head Bai Jiuyi brought four people from No. 2 Division to torture me. They were division political head Gao Zhonghai, division deputy Liu Wei, team leader Diao Xuesong, and team leader Li Chengcun. Around 8:00 a.m. that day they came to my bed. After they confirmed my stance toward Falun Gong they said, "It seems you are not afraid of death. We will not let you die, but will make you live in a state worse than death. We just want to play with you. When we are tired of playing we will make you completely disabled. Then we let you go home and die at home several days later. The higher-placed officials in the labor camp bureau know you and so do those in other divisions. They all support us to play with you. They will take the responsibility. Since someone else takes responsibility, let us play. We fed you well to help you recover, because we want to play well with you!"

They ordered the monitor to drag me to the other cell. Four men with their shirts off were waiting inside, ready to torture me. They strapped cloth over my mouth to prevent me from crying out, which caused me to lose two front teeth. They fixed a tape player on my body and inserted the earphone into my ears. It loudly played brainwashing propaganda. Then I was handcuffed behind my back and hung from the upper railing of a bunk bed. My feet barely touched the floor. The administration section head arrived to check. He was not satisfied and said, "If you insert a block in the upper railing, his feet can't touch the floor." He repeatedly said, "This enforcement is not enough!"

They constantly berated me. Sometimes they pulled me up by my hair; sometimes they kicked my private parts and twisted my arms. They repeatedly put a lit cigarette into my nose, badly burning the outside of my nostrils, leaving scars. I still feel pain in my nose now. The cigarette smoke kept entering my lungs. They said it was to make my lungs black and to have me get pulmonary tuberculosis or even lung cancer. I still cough a lot even now. They kept smearing the hottest chili on my eyes, ears, anus, and genitalia. They didn't stop when seeing my genitalia starting to bleed. When I lost conscious due to the torture, they threw cold water on me to bring me to. They used cigarettes to burn my toenails and fingernails. I still feel pain in my right little finger.

They also covered my head with two layers of plastic bags and filled them with smoke. When the air and smoke was absorbed, I was dripping with sweat. They would remove the bags after seeing I was unable to hold on any more and allowed me to breathe again. Then they repeated the same torture.

I was tortured in such a way for six hours daily. At night I was cuffed to a bed with bare bed boards, without covers. My feet were tied with cloth strips, which made me unable to move. I was a skeleton, and the hard bed was painful to lie on.

This is the so-called humane management in the forced labor camp; such torture happened openly and unscrupulously at the Suihua Forced Labor Camp. The monitors and prison guards all knew about it. These facts are undeniable. I hope by exposing these criminal acts it might help people to realize: the persecution of Falun Gong practitioners is real.