Candy Manufacturer: The Show Presents a Message of Peace (Photo)

Nael Burqawi is an immigrant from the Middle East and has lived in the US for more than twenty years. He is a candy manufacturer. After seeing the information about the Chinese New Year Splendor from a TV advertisement, he decided to bring his wife to see the show. 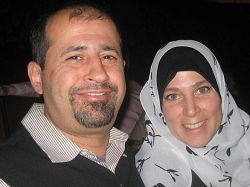 Nael Burqawi and his wife

Mr. Burqawi said it was his first time to see a Chinese show at Radio City Music Hall. He enjoyed all the performances and praised the beautiful costumes. He was impressed most with "Drummers of the Tang Court."

His wife said that the show presented a message of peace. Regarding two performances, "The Risen Lotus Flower" and "The Power of Awareness" about Falun Gong, she said she had heard of the Chinese Communist Party's persecution of Falun Gong from the radio a few years ago, but did not know that the persecution was still going on in China.

Both of them said they would spread the word about the show to their friends.

“New York: "Even Better than We Thought It Would Be" (Photo)”